STUDIO MONTCLAIR PRESENTS: “AND THEN…THERE WAS PAINT,” AN EXHIBITION THROUGH SMI’s INCUBATOR PROGRAM 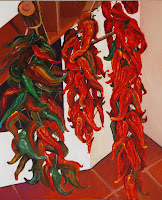 AND THEN…THERE WAS PAINT
a show of works by four local artists whose different aesthetics all connect through their pursuit of art as a second career.

About the Incubator Program

Studio Montclair’s Incubator Program seeks to mentor new and emerging artists and provide them with a space for what is often their first solo or small group show exhibit.

Studio Montclair Inc. is a non-profit organization of exhibiting professional and emerging artists and others interested in the visual arts. In the past year, it has exhibited more than 280 works of art and has encouraged and interacted with close to 1,000 artists.

About the Academy Square Gallery Directors