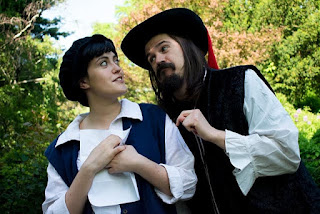 Love and Music in the Forest: AS YOU LIKE IT

ADMISSION: free
WHEN & WHERE: 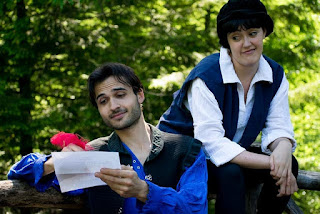 Hotheaded Orlando (Colin Colford) has been shut out of his inheritance by his really mean for no reason older brother (Joey Sponseller) and is forced to make a name for himself in Duke Frederick’s (Sean Devonshire) court. He decides to take an amateur night wrestling challenge with the Duke’s champion, Charles (Jake Simard), whom he completely trashes. In his display of physical prowess, he thoroughly impresses the Duke’s daughter Celia (Julianne Wentz) and her cousin, Rosalind (Ashley Robin Patten) the daughter of the now deposed duke, Duke Senior. (Above, right: Orlando and Rosalind - Colin Colford and Ashley Robyn Patten) 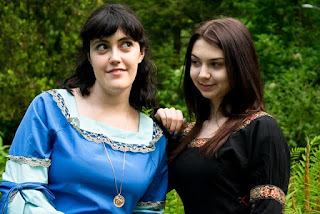 Rosalind is more than impressed with Orlando, she’s head-over-heels in love and relishes in getting more one-on-one time with him. However, before any further meeting can occur, the neurotic and looking for plots around every corner Frederick appears with his trusty guards and exiles Rosalind to the Forest of Arden. He banisher her to the place where he father and a few of his trusty advisors now live like Robin Hood and his merry men. Celia quickly defends her cousin and threatens to go with her cousin. Frederick doesn’t think she’s serious and dismisses the idea, but the two girls plan their escape. Rosalind comes up with the brilliant idea to disguise herself as a guy named Ganymede (like you do) and Celia will be her sister Aliena. The two suit up and drag their personal jester along for the ride, the very prissy and always ready with a quip, Touchstone (Zach Hendrickson). (Above, left: Rosalind and Touchstone - Ashley Robyn Patten and Zach Hendrickson)

Meanwhile Orlando learns from his trusty servant Adam (Sabrina Fara Tosti) that he’s a wanted man by the Duke and his brother Oliver and they run off for the forest themselves. In the Forest of Arden, Rosalind and crew encounter a crazy cast of characters including:

As happy as Rosalind is in her new adventure she is even more giddy to learn that Orlando is in the forest but how can she get him interested and keep up her disguise while dodging a lusty Phoebe and the other crazy citizens of the forest?

As You Like It was written in 1599 and marks a high point in Shakespeare’s midcareer with sophisticated comedies and before he embarked on his darker, tragic works.

“Being that its set in a forest with no new huge battles or court intrigues, the play lends itself really well to showings in parks and more intimate settings like libraries, said director, Jon Ciccarelli.

“We decided to go back to basics with the show and set it medieval world full of pageantry, full of impromptu songs, and love of the fairy tale world. The show is very musical so we’ve highlighted that with lots of live instruments and some recorded music. Its almost in danger of becoming a 1950s style musical,” he said.

Hudson Shakespeare Company, now in its 28th season, will return in July with a fantasy costumed, all-female production of Coriolanus and with the Halloween-themed Doctor Faustus in October. For more show information visit www.hudsonshakespeare.com.