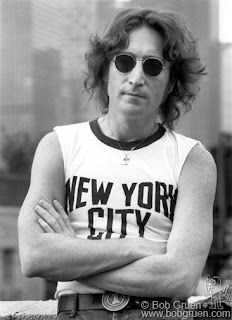 Bob Gruen: Rock Seen
Featuring Photographs of Legendary Performers from the Golden Age of Rock and the Punk Rock Scene

Members of the Morris Museum can join us for an opening reception and member preview from 6:00PM – 7:00PM  There will also be a public viewing of the exhibition and book signing from 8:00PM – 9:00PM (special member book price this night only: $40. Regular price: $45 for members, $50 for non-members).  To RSVP or to become a Member: membership@morrismuseum.org or 973.971.3721

The new exhibition Bob Gruen: Rock Seen opens at the Morris Museum, featuring a selection of 72 works by one of rock & roll's best-known and most respected photographers. Active in the rock scene for over fifty years, Bob Gruen (b. 1945, New York) has shot some of the most memorable images of rock music's greatest artists. His photographic approach is distinguished by the ability to capture performers, both onstage and off, through candid images that convey the feeling of the moment. 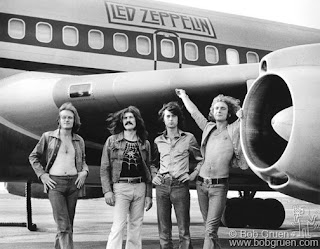 From the beginning of his career Bob Gruen has been as central to the rock scene as the musicians he photographed. His body of work reflects rock music's trajectory, from the mid-1960s, documenting pioneers such as Bob Dylan, Chuck Berry, and Elvis Presley, to the hard rock bands of the early 1970s, such as The Rolling Stones, Led Zeppelin (right), and The Who. He was also John Lennon and Yoko Ono's personal photographer and friend, taking pictures of their working life as well as private times (above, left).

As Gruen achieved greater recognition within the industry, rock & roll became a lifestyle. He began touring with groups such as Ike and Tina Turner, Kiss, and Alice Cooper. He continued with the New York Dolls, Ramones, Blondie, Sex Pistols, and The Clash, documenting the punk rock scene of the mid-1970s, the post-punk wave of the 1980s, and beyond.

As the chief photographer for Rock Scene magazine, as well as freelance for Rolling Stone, Creem, and other publications, Gruen’s behind-the-scenes photo-features detailed the backstage parties and life on tour in America and the U.K. These iconic images provided a voyeuristic look at the world of rock & roll―onstage, at home, on the road, in the studio, and at play.

Gruen's work has been included in numerous group exhibitions at institutions around the world, including the Brooklyn Museum (2009, 2018);  Beit Hatfutsot Museum, Tel Aviv (2016); The Beatles Story Museum, Liverpool (2015);  Centro Cultural Borges, Buenos Aires (2011); Museum of Modern Art, New York (2009); and Pearlstein Gallery, Philadelphia (2017). In 2007 he had a solo exhibition at FAAP Museum, Sao Paolo. This is Gruen's first one-person museum exhibition in the U.S.

In addition to Gruen's photographs there will be screenings of his films in the Museum's Bickford Theatre throughout the course of the exhibition FREE with museum admission. Pre-registration is not required.

In the early 1970s, Bob Gruen and Nadya Beck toured with Ike and Tina Turner and filmed them performing—on the road and behind the scenes.

Drawn from footage taken with a portable video recorder over a period of three years this feature-length documentary by Bob Gruen and Nadya Beck follows the band from their early performances in New York to their West Coast tour.

Featuring period footage of the legendary proto-glam/punk forefathers, shot by Bob Gruen and Nadya Beck, from New York City to the TV studios, clubs, and swimming pools of Los Angeles.

Learn the stories behind the iconic images in this insightful conversation

With Bob Gruen and music critic and rock & roll expert, Jay Lustig who is also the founder and editor of NJ Arts.net.

Considered the Godfather of “the New Jersey Sound,” Southside Johnny has been thrilling audiences with his music since the 1970’s with his groups, The Asbury Jukes, and Poor Fools. Southside Johnny will perform an intimate acoustic performance with keyboardist, Jeff Kazee that will open with a conversation between Southside and Jay Lustig to take audiences ‘behind the music’.

Leadership support for these programs is provided by BASF.

Bob Gruen in Conversation with Jay Lustig, and Southside Johnny and Jeff Kazee are presented as a co-production with NJArts.net.