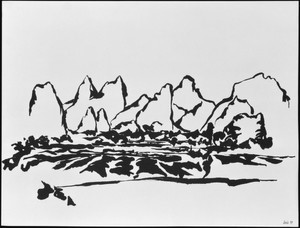 WHEN: through June 30
WHERE: Princeton Public Library, 65 Witherspoon St., Princeton

The Princeton Public Library, in collaboration with the Princeton Festival, hosts a display of brush paintings of scenes in China by Thomas George (1918-2014). The internationally celebrated artist and Princeton resident created the brush paintings in the wake of the opening of U.S. relations with that country by President Nixon in 1972.

In the early 1970s, when the People’s Republic of China normalized diplomatic relations with the United States, internationally celebrated artist and Princeton resident Thomas George (1918-2014) was one of the first artists invited to China. There he focused mainly on bold brush and ink drawings of the dramatic mountains of Kweilin. Gordon Washburn, writing in the catalogue of an exhibition of Mr. George’s work at the Smithsonian, observed: “Each drawing offers a rich abstract pattern, amounting to a kind of distillation of a Kweilin mountain scene. The more reduced they are in number of strokes, the more concentrated is the effect.”

Mr. George’s son John has graciously offered to display selected works in the Princeton Public Library through June 30. They will be moved to the lobby of McCarter Theater during the 3 pm performances of Nixon in China on Sunday June 23 and Sunday June 30. Please stop by to enjoy these works by a proud son of Princeton.

“These are wonderful, evocative works that might never have been created without the renewal of relations between China and the U.S. depicted in the opera,” said Richard Tang Yuk, General and Artistic Director of the Festival. “We are grateful to John George for sharing a selection of his father’s China paintings with us and our audience.”