REVIEW: “TOO HEAVY FOR YOUR POCKET” @ GEORGE STREET PLAYHOUSE FAILS TO IGNITE, INVOLVE 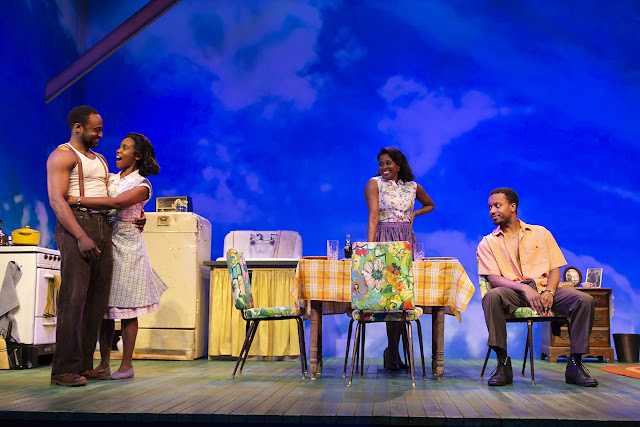 I had the sense, after seeing Jiréh Breon Holder’s drama, Too Heavy for Your Pocket, now closing out George Street Playhouse’s 2019-2020 season, that I had seen two plays separated by a 15-minute intermission. (Above L-R: Landon G. Woodson, Janiece Abbott-Pratt, Felicia Boswell and Donnell E. Smith)

What starts out as an unusual interpretation of the civil rights movement from the point-of-view of the community it aims to help ends up losing its way in the second act until it grinds to a halt without much resolution. It may have won several prizes when Roundabout Theatre produced it in 2017, but Too Heavy for Your Pocket is too episodic; presents too many story lines, some of which are totally unexpected; features talented actors who sport thick Southern black accents that are difficult, at times, to understand; and clocking in at two and a quarter hours, feels interminable.

It pains me to write that because, true to form, George Street’s production values are once again superior. On a set designed by Wilson Chin and lit by Jason Lyons to evoke the home of a young black couple, the Carters, the action unfolds in Nashville during the momentous summer of 1961—dubbed the “Freedom Summer” for the buses of young people traveling to Mississippi to register black voters. Many of these “Riders” came from the North, but young blacks were recruited in the South to join the cause. 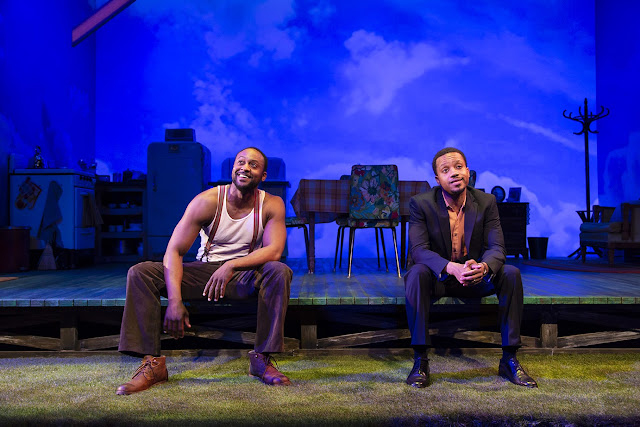 One of these is Bowzie Brandon, a smart 20-year-old who has won an academic scholarship to Fisk University, a prestigious black college in Nashville, where he will study after completing a summer of remedial courses. This achievement dazzles his wife Evelyn, a juke-joint singer who has supported him through his studies; his friend Tony Carter who, orphaned at 6, has had to forgo education to support himself; and Tony’s wife Sally-Mae, who has just graduated from beauty school herself. Finding himself out of place among the middle-class students at Fisk and seeking “the first serious thing [he’s] ever done with his life,” Bowzie is easily recruited to become a Rider, an act that horrifies his wife and friends—except for Sallie-Mae, who understands his desire to seek “true justice.” Of course, the worst happens: Bowzie is arrested and sent first to jail and then to the notorious Parchman State Prison Farm in Mississippi, where he is beaten, tortured and endures solitary confinement. Side stories involve Tony’s philandering, the pregnancy Evelyn hides from Bowzie, and letters Bowzie writes to Sally-Mae, instead of to his wife. As for the title, you won’t find out what that means until the final speech of the play, and even then, it’s not very clear. 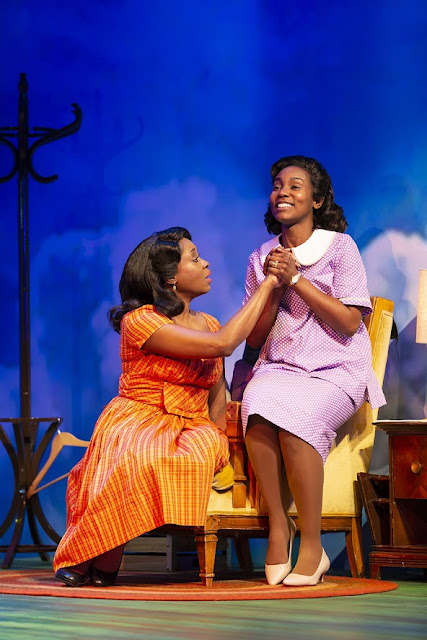 The quartet of actors cast by director LA Williams turns in superb performances, although Evelyn seems to be quite a bit older than Bowzie. In the latter role, Donnell E. Smith (above, left, with Woodson) is disillusionment personified; we watch his confidence crumble before our very eyes. Just listening to him recite his letters brings home the horrid conditions black men faced/face in incarceration. As Sallie-May, Janiece Abbott-Pratt appears to be his polar opposite. From the moment we see her, her optimism at her impending graduation and Bowzie’s educational adventure are infectious, making her suspicions about her husband’s tom-catting all the more poignant; indeed, her final big scene wherein she gives us a glimpse of what it meant to be a black woman in Nashville in 1961 is maddeningly harrowing and dehumanizing. (Above, right, Boswell and Abbot-Pratt)

Landon G. Woodson’s Tony Carter has the looks of a manual laborer, the slyness of a man doing something he shouldn’t and, ultimately, the earnestness of a man who works hard and long to scrape together money to support his family—all of which engender mixed feelings on the part of the audience toward his character. And as Evelyn Brandon, Felicia Boswell very effectively conveys the “meanness” she uses to control her husband and her exasperation at her husband’s rash decision. She gives us a taste of her talent when she unexpectedly breaks into song; it’s totally irrelevant to the action, but it is a nice diversion.

Asa Benally is to be congratulated for her costume design, true to the period and status of these characters. Chris Lane has composed original music and designed the sound; the jazz played before the curtain opens and at intermission are a nice touch. Nathan C. Crocker’s dialect may suit the time and place, but I found Evelyn often difficult to understand. Her Southern black accent was a bit too thick at times.

For a play that should once again resonate in this period of voter suppression and rollback of hard-won civil rights, Too Heavy for Your Pocket should provide more bang for the buck. In an effort to personalize the struggle, playwright Holder has stuffed his drama too full of extraneous details and events; having characters (Bowzie mostly) enter between scenes to read letters, laugh uncontrollably or simply sigh is distracting and interrupts the dramatic tension. With some revision, Too Heavy for Your Pocket could be a better play. As it stands, it’s still a work in progress.

Too Heavy for Your Pocket will be performed at George Street Playhouse, 103 College Farm Road, off Rte. 1 South, in New Brunswick, through May 19. For information and tickets, call 732.246.7717 or visit www.GeorgeStreetPlayhouse.org online.