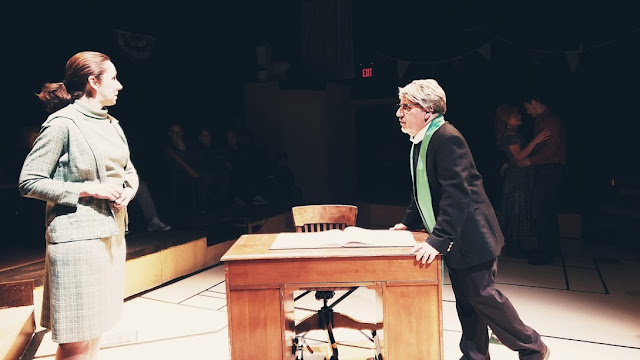 Ok….straight out…We haven’t enjoyed a comedy as much since Noises Off. Home of the Great Pecan by Stephen Bittrich* is a gentle adult comedy with marvelous quirky characters and hilarious one-liners. As we have come to expect from CTG: it is beautifully produced with a cast of North Jersey community theater all-stars, led by Dale Monroe, Steven Nitka (both photo lower left), Lynn Langone (below, right) and Jill Bormann. The director of this three-ring circus is George Seylaz. This is his directing debut at the Black River Playhouse. However he has been very active at the Nutley Little Theatre, Summit Playhouse and the Chatham Community Players. (Above: JILL BORMANN and STEVEN NITKA) 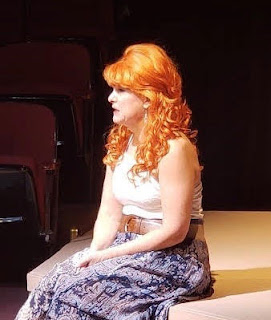 The play is set in a real Texas town…Seguin (boyhood home of Bittrich), “famous” as the home of the Great Pecan! Seguin is where “the hair is big and the nuts are even bigger!” The play has never been produced in our area before, thus all we knew came from the CTG publicity release: “ A hilarious, quirky southern comedy—think Greater Tuna meets Plan 9 From Outer Space!

Set in a small Texas town in the 1980's, mayhem ensues when Seguin's prized landmark—the Great Pecan—is stolen! A minister on the make, aliens, a prom queen on the verge and a philandering fiancé are just a few of the wild cast of suspects.” Not stated is that at its heart the play is a love story, granted a bizarre tale that centers on a wedding ring, a fancy pickup truck and a shotgun. To reveal more of the wacky plot and the wild one-liners would take away from your enjoyment from this unique comedy. This is five-star fun that we encourage you to enjoy first hand. 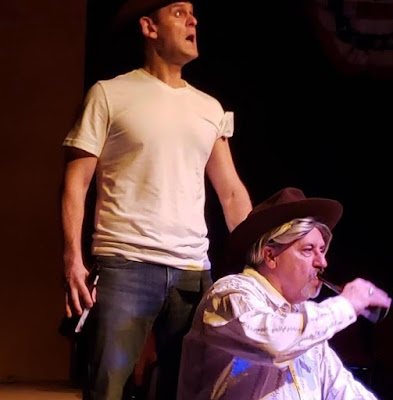 Most of the cast hilariously double or even triple roles requiring near split second costume changes. Dale Monroe, certainly one our most talented and versatile actors, is outstanding in both his roles- deputy Sheriff Diggity and particularly as Greeley Green, a good ol’ Texas boy who loves his pickup truck and Tammie Lynn Schneider, in that order. Tammie is played to enthusiastic perfection by Lynn Langone.

Veteran performer, Steven Nitka absolutely nails the part of charismatic minister, Reverend Pat. His tithing sermon and later his seduction effort are two hilarious highpoints of the production. The always impressive Jill Bormann is wonderful in both her parts. First: as Rosy Stadtmueller, friend of Tammie and “friend” of Reverend Pat. She marvelously reappears as Sonja Guarez the owner of a local beauty shop and Tammie’s employer. Carol Holland nicely doubles as the sheriff AND his wife!

Rounding out the fine cast are Lily Boyle (aspiring prom queen and town juvenile delinquent) and Will Palazzolo (DJ, owner of hardware store and local misfit Francio). Boyle has fun with a bathroom rehearsal of her Pecan Queen acceptance speech. Palazzolo is spot-on in his Francio beauty parlor scenes.

Performances are Friday and Saturdays at 8:00 and Sundays at 2:00pm. Tickets are $20.00 with a discounted price of $18.00 for seniors over 65 and students under 18. Tickets may be purchased online at www.chestertheatregroup.org. 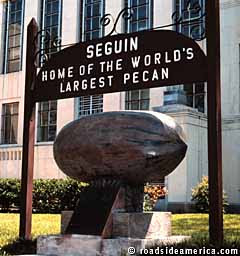 *NOTE: In Seguin, Texas, a nut claims to be World's Largest Pecan. The giant pecan that sits in front of the Seguin, TX, city hall was the brainchild of a dentist, who wanted to put his plastering skills to civic use. Erected in 1962, the pecan is five feet long and 2 1/2 feet wide, and weighs approximately 1000 pounds. It was dedicated to Cabeza de Vaca, a Spanish explorer who was held captive on the Guadalupe, known then as the “River of Nuts,” for 10 years. He thrived on a diet of local pecans. Seguin began billing itself as "Home of the World's Largest Pecan," a title it held for 20 years.

But a bigger Pecan now stands near the town of Brunswick, Missouri, a mighty goober clenches the official title, but for how long? Seguin's puny replica has the backing of an entire town with apparently little else going for it: the city motto has remained "Home of the World's Largest Pecan," regardless of how many postcards are mailed from Brunswick to Seguin's Chamber of Commerce. Brunswick's Pecan, hefty though it may be, is in a lightly traveled part of north-central Missouri, outside town and off by itself.