REVIEW: SLOW PACE BLUNTS COMEDY OF “THE IMPORTANCE OF BEING EARNEST” IN CHATHAM 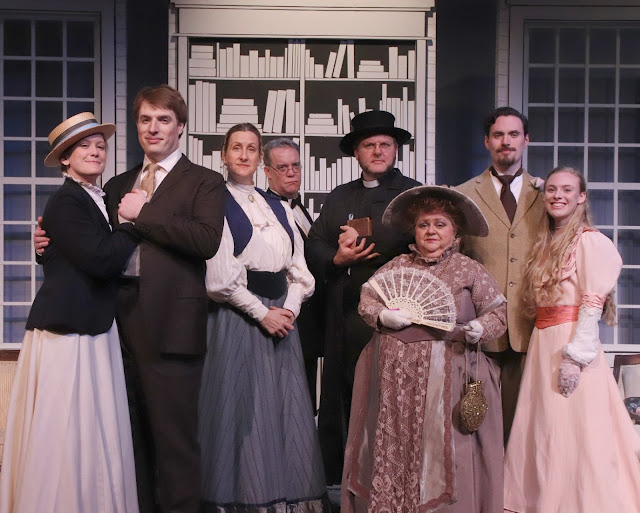 The adage, “timing is everything,” is nowhere truer than when applied to comedy—especially an Oscar Wilde comedy. The outlandish plot developments, mistaken identities and witty aphorisms need to happen and be delivered at breakneck speed so that, given little time for the incongruities to be evident, we accept them as (almost) the truth. (Above, L-R: Crystal Anne Bennett, Andrew Gordo, Lisa Barnett, Charles Grayson, David Romankow, Susie Speidel, Peter Newes and Emily Miller.)

Would that be the case with The Importance of Being Earnest, now closing out the Chatham Community Players’ 97th (!) season. Tom Frascatore’s sluggish direction makes evident plot development holes so big one could drive a truck through them, characters standing around with little to do than to listen, and clever zingers that don’t get the laughs they so richly deserve. 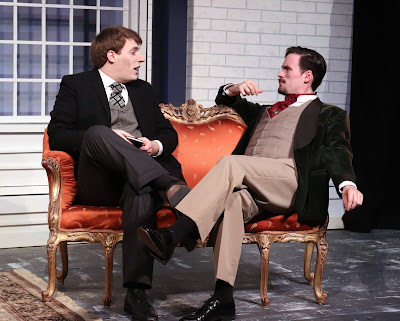 This uproariously tangled web of alter egos and mistaken identities involves a highly improbable plot revolving around two eligible bachelors: one anxious to marry, the other avoiding it like the plague. John (Jack) Worthing’s wild brother Earnest provides Jack with an excuse to escape his dull home in the country to frolic in town. Algernon Moncreiff’s ailing friend Bunbury provides a similarly convenient excuse for him to escape town to pursue adventures in the country. But Earnest and Bunbury are imaginary characters, created by Jack and Algy to add some spice to their lives. When their deceptions eventually cross paths, a series of hilarious crises arise to threaten to spoil their romantic pursuits. (Above, left, Andrew Gordon and Peter Newes) 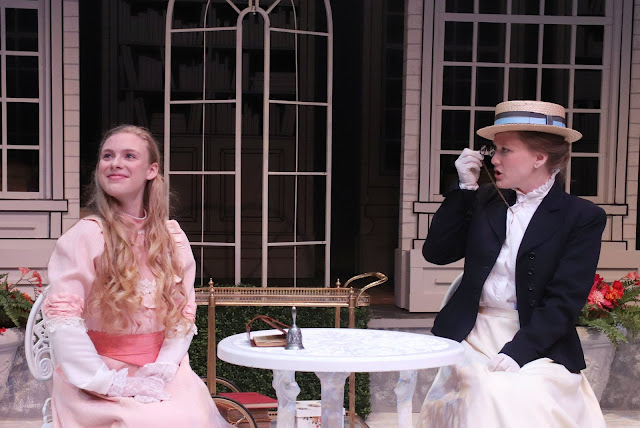 The quartet of actors playing the young folks turn in a mixed bag of performances. Neither of the two men appear to be totally comfortable with Wilde’s witty repartee. Like the Sloane Rangers of the Princess Diana era, they should be full of themselves, sure they’re “cool,” dismissive of any responsibility except having fun and spending money and of keeping up appearances (and marrying rich young women) even when they don’t have any dough. While Andrew Gordon has the rosy-cheeked good looks of the more well-behaved country gentleman Jack Worthington, Peter Newes’ portrayal of the more urbane Algie Moncrieff is a bit too laid back and detached. Trained as a singer, Newes doesn’t appear to be quite comfortable delivering dialogue and reacting as others speak. Crystal Anne Bennett’s shallow Gwendolyn (above right, with Emily Miller) is the type of girl you just know will grow up to be her mother—in this case, the dreaded Lady Bracknell. As the character who should be Gwendolyn’s opposite, Emily Miller as Cecily is equally as superficial, despite living far away from the city’s influence and mores. The two share a deliciously obtuse idea about only loving a man named Earnest! While Miller’s constant smiling should telegraph her character’s ditziness, Cecily should be unaware that her behavior and ideas are ridiculous; it’s more fun when someone utters inanities as though they are serious.

The other lovers —the country parson Reverend Chasuble, played with droll nincompoopery by David Romankow, and the object of his affection, the aging governess Miss Prism, played by Lisa Barnett as a repressed spinster ever mindful of her charge’s education—both simmer with barely repressed sexuality, kind of like teenagers in heat. 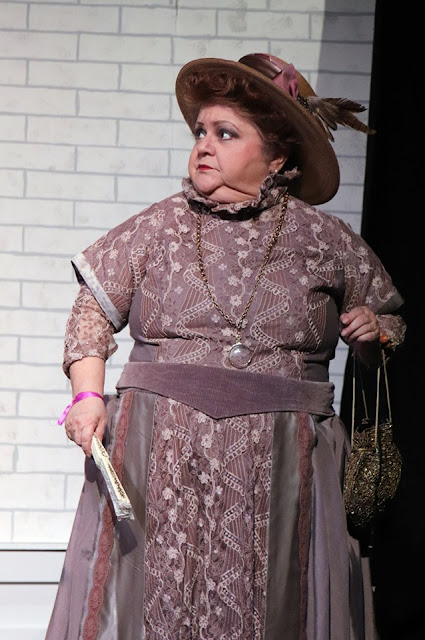 But the two actors who steal the show are Susie Speidel (right) as Lady Bracknell and Charles Grayson in the dual roles of Algernon’s butler Lane and Jack’s butler Merriman. Despite her diminutive stature, Speidel sails onstage like a frigate. Ever imperious, she makes loud, outrageous pronouncements in an upper-class British accent and cows the young people with her formidable presence. She appears only twice, but when she’s onstage, we cannot take our eyes off her! As Lane, Grayson is at his officious, pompous best, especially when he moves with military precision, but his performance as Merriman is quite droll. Just watching him serve tea to the two young ladies, complete with quivering cups, wobbly walk and the sight of his ample backside is almost worth the price of admission!

KC Cameron has designed a lovely set that depicts both city and drawing rooms and the garden at Jack’s estate. The sound design by Joe DeVico includes music of the late 19th century. Kai Movsovich has attired the characters in duds that suit their age, position and the era. Cecily’s pink ruffled frock is perfect for a country girl, while Gwendolen’s more tailored duds clue us into her city origins and make us believe (mistakenly) that she is more intelligent than Cecily. Lady Bracknell’s gowns and hats befit an upper-class society grande dame.

Many young actors think that modern, edgier plays are difficult to perform, but the Chatham Community Players’ production of The Importance of Being Earnest shows this is not so. Indeed, this comedy of manners in the flesh, with its witty one-liners and broad physical comedy, is a testament to the genius of Oscar Wilde and should be performed with verve, audacity and, above all, impeccable comedic timing. Opening night felt more like a preview. As the run progresses, nerves should settle down, actors will be more comfortable uttering their lines and the pace should pick up.

Four theatrical companies are producing The Importance of Being Earnest this month. I wonder why. Perhaps the answer lies in producer Joelle Bochner’s explanation of why she thinks the play remains so popular: “[H]aving seen and read this show many times over the years, I always find myself surprised that it does not feel dated, though it is set in 1895. There will always be those who speak what they want people to believe is the truth, and those of us who see right through them to the reality of what they are doing or saying. As audience members to this production, we all see through the ‘realities’ presented to us and can take delight in how each character earnestly manipulates the truth to his/her own purposes. We know that the blatant secrets kept will eventually come to light. And who among us does not wish for love at first sight, for wrongs righted and for everlasting devotion?” Sounds like the perfect play for America in May 2019.

The Importance of Being Earnest will be performed at the Chatham Playhouse, 23 N. Passaic Ave., Chatham, through May 18. For information and tickets, call the box office at 973.635.7363 or visit www.ChathamPlayers.org online.