REVIEW: LOTS TO LOVE IN “SHE LOVES ME” AT SUMMIT PLAYHOUSE

Last Saturday, on what would have been the 39th anniversary of my marriage to a terrific guy, I received a wonderful gift: a chance to review a splendid production of She Loves Me at the Summit Playhouse where it’s being performed by a very talented cast.

A gentle and intimate piece of musical theater with a beguiling Mittel-European setting, attractive characters, a tender love story and a charming musical score by Jerry Bock and Sheldon Harnick (of Fiddler on the Roof fame) guaranteed to touch your heart and make you smile, She Loves Me fairly drips schmaltz, but the gemütlichkeit (a feeling of warmth, friendliness and good cheer) in the theater was intoxicating.

Based on a Hungarian play by Miklos Laszlo, the plot is probably familiar to film buffs as “The Shop Around the Corner,” which starred Jimmy Stewart as the male lead, or “You’ve Got Mail,” starring Tom Hanks and Meg Ryan. She Loves Me revolves around the relationship between two clerks who loathe each other, Amalia Balash and Georg Nowack, co-workers in Maracek’s Parfumérie. They are, coincidentally, anonymous members of a Lonely-Hearts Club who, in their letters, are known to the other only as “Dear Friend.” It’s a Much Ado about Nothing kind of relationship—each is really attracted to the other but won’t admit it—and it’s just as much fun to watch the plot spin itself out to a very agreeable resolution. 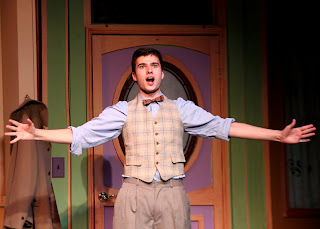 The Summit Playhouse’s production has so much to recommend it that I don’t know where to begin. For starters, the casting is marvelous; each actor is a perfect “fit” for the role, in talent and looks. Getting things off to a grand start with “Good Morning, Good Day,” Chance Friedman (right) as Arpad Laszlo, the delivery boy, arrives onstage on his bike; he’s earnest and likeable, and when he asks Mr. Maracek to “Try Me” as a salesclerk, we really root for him. Joseph Schmidt’s Ladislav Sipos is appropriately timid as a clerk who wants, so desperately, to keep his job that he’ll do anything his employer asks of him. His glorious voice and rather prissy manner are perfect for the role. 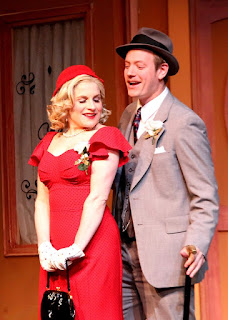 Steven Kodaly, played by Joey Tible (left), is an oily cad with no respect for his adoring girlfriend Ilona Ritter, played with great verve by Colleen Renée (left). When Tible sings “It’s Been Grand Knowing You,” with its high, quivering notes, he brings down the house. Renée is a marvelous comedienne, as well as a terrific singer. Constantly dumped by Kodaly, she finds true love on “A Trip to the Library,” delighting the audience with her animated facial expressions and beautiful voice. Mr. Maracek is played by avuncular Michael King in fine form. His account of his bachelor exploits in “Days Gone By” is most charming. The antics in the night club of Christopher Williams’ headwaiter and Charley Baird-Hassel’s hapless busboy exhibit terrific comedic timing.

But I’ve saved the best for last (and best is 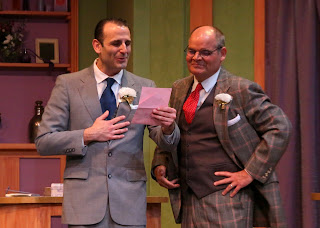 really a relative term in a cast of such fine performers): Georg Nowak, played by Stephen Kaplan (right, with Schmidt, reading a letter from “Dear Friend”), and Amalia Balash, played by Jessica Albano—both marvelous performers. Along with strong and expressive voices, both act the lyrics, as well as just sing the notes. The first time we meet Amalia, she wows Mr. Maracek with her ability to sell a musical cigar box, which Georg bet wouldn’t sell. From then the antagonism builds, coming to a head in the Café Imperial where Amalia awaits her anonymous “Dear Friend” (really Georg—but he’s too nervous and surprised to tell her). Albano (below) poignantly conveys Amalia’s yearning for love as she worries “Will He Like Me,” while Kaplan’s Georg is adorably awkward as he attempts to waltz to “Days Gone By” and in his rather crude interaction with Amalia in the nightclub. 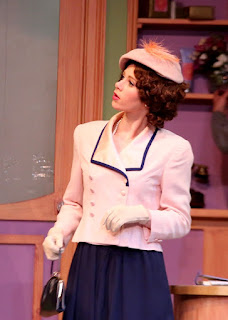 Other delights to this production include energetic and steady direction by Lynn Polan. There are no dead spots or long stretches of inaction; everything moves along at a good clip. “Twelve Days to Christmas” is a case in point; with the frenetic movement of a large number of people around the stage, all trying to finish their Christmas shopping on time, this number had the audience in stitches! I am only familiar with Polan’s direction of straight dramatic plays, so her skill at musical theater is a pleasant surprise. Truly, she’s a multi-talented director!

The fantastic set, designed by Roy Pancirov and lit by Wendy Roome, almost functions as a supporting character in She Loves Me. The Summit Playhouse stage is not very large, but Pancirov has made use of every inch. For instance, the orchestra, ably led by Joe DeVico, is located behind the stage—actually a plus, for they don’t drown out the unmiked singers but provide able accompaniment to Bock and Harnick’s melodies. Most astonishingly, what appears to be a central shop doorway opens to reveal the interior of Maracek’s Parfumérie, scenery slides out on the sides of the stage and store counters roll into view! This scene change happens so effortlessly that you’ll marvel that human beings, not hydraulics (as on Broadway) power the scene switch. 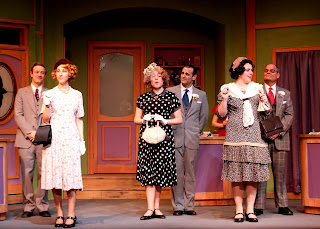 Costumes designed by Ann Lowe are elegant and sumptuous (left). Worthy of special mention are the lovely dresses worn by Renée and Albano and the suits worn by the women shoppers that ably evoke the time period—the early 1930s—and the change of seasons in which the story is set. The men look suave in suits and boutonnieres appropriate for a clerk in such an elegant shop.

So, will Amalia and Georg discover the true identity of their “Dear Friend”? Will they put their conflicts and prejudices aside and find love? Well, just remember what happens in Pride and Prejudice, Much Ado About Nothing and the two aforementioned films. By the time this play has ended and the conflicts have been resolved, you’ll feel warm and tingly all over. They sing “She Loves Me;” you’ll say “I Love It”!

She Loves Me will be performed at the Summit Playhouse, 10 New England Ave., Summit, through May 19. For information and tickets, call the box office at 908.273.2192 or visit www.TheSummitPlayhouse.org online.