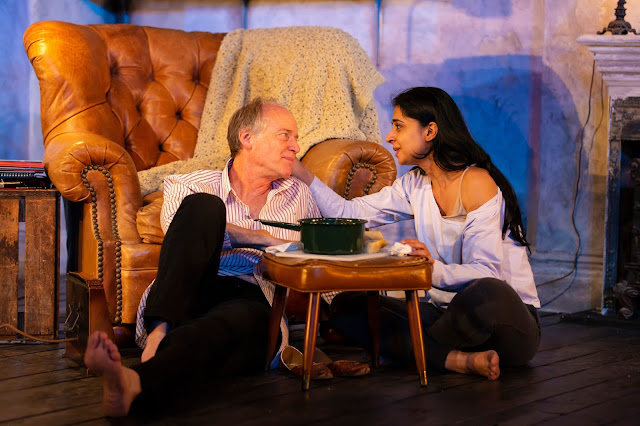 WHEN: May 3 through June 2
WHERE: Berlind Theatre, 91 University Pl., Princeton
TICKETS: Tickets start at $25 and are on sale online at mccarter.org, by phone at (609) 258-2787, or in person at the McCarter Ticket Office, located at 91 University Place in Princeton.

The production’s running time is 2 hours, 20 minutes with one 15 minute intermission.

On a bitterly cold London evening, schoolteacher Kyra Hollis (Mahira Kakkar) receives an unexpected visit from her former lover, Tom Sergeant (Greg Wood), a successful and charismatic restaurateur. As the evening progresses, the two attempt to rekindle their once passionate relationship with food and wine, only to find themselves locked in a dangerous battle of opposing ideologies and mutual desires.

David Hare’s Skylight has been celebrated as a searing story of past loves, ever-present politics, and future hopes. Winner of the 2015 Tony Award® for Best Revival of a Play and an Olivier Award for Best Play, Skylight was originally produced at the National Theatre in 1995, before transferring to runs on the West End and Broadway. It has been hailed critically, being called “luminously beautiful and wildly truthful.” by The New York Post.

About the production, Director Emily Mann said “Writer to writer, I greatly admire David’s crystalline writing. Though I knew David quite well in the 1980s, I have never before directed one of his plays. Skylight is a love story that simultaneously asks tough questions about the politics of the day. Always managing to keep the love story in the foreground and the politics deeply imbedded in the on-stage tension between the lovers, David Hare created his finest play.”

The design team for Skylight includes scenic design by Tony Award® winner Beowulf Boritt, whose incredible work has been showcased on McCarter stages previously with Murder on the Orient Express, Turning Off the Morning News, and Stones In His Pockets. He is joined by costume designer Montana Levi Blanco (Fabulation and In the Blood for Signature Theatre), lighting designer Jason Lyons (numerous Broadway credits including Hand to God and On the Town), and sound designer/composer Pornchanok (Nok) Kanchanabanca (many regional credits including Cymbeline at Yale Rep.). Casting for this production of Skylight is provided by Caparelliotis Casting.

David Hare has been called "one of the great post-war British playwrights.” First co-founding Portable Theatre Company and Joint Stock Theatre Group, he served as Resident Dramatist at London’s Royal Court Theatre and Resident Dramatist at the Nottingham Playhouse. His first play, Slag, was performed at Hampstead Theatre Club in 1970. Subsequent works include Knuckle, Fanshen, Plenty, Pravda: A Fleet Street Comedy, The Secret Rapture, Skylight, Amy's View, and The Judas Kiss. He has been Associate Director of the National Theatre since 1984, and was knighted in 1998.

Inside Story
Join us 45 minutes before every performance for a talk led by a member of McCarter’s artistic staff. Hear about what inspired the play, its unique style, and more. All Inside Story talks take place in the Berlind Theatre unless otherwise noted in the lobby upon arrival.