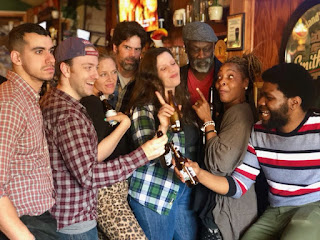 With shows such as Robert Askins’ Hand to God, Caryl Churchill’s Cloud 9, Albee’s The Goat or, Who Is Sylvia?, and Ibsen’s Peer Gynt, Black Box Performing Arts Center is quickly making a name for itself as the area’s premiere destination for immersive and cutting-edge plays. How to Transcend a Happy Marriage is the third main stage show of 2019, following the NJ premiere of Significant Other by Joshua Harmon and How to Transcend a Happy Marriage by Sarah Ruhl.

Sweat - presented in special arrangement with Dramatists Play Service - finds the heartbeat of America with the story of a group of factory workers whose friendship is tested as they explore issues of loyalty, finances, and race. Winner of the 2017 Pulitzer Prize, Sweat is hailed as “…passionate and necessary…a masterful depiction of the forces that divide and conquer us…SWEAT communicates its points with minimal fuss and maximum grit. Along with the rage, despair and violence, there’s humor and abundant humanity…a cautionary tale of what happens when you don’t know how to resist” (Time Out NY). BBPAC’s production is directed by Matt Okin and features the talents of Kymbali Craig, Michael Gardiner, Alex Hughes, Kirsten Lewis, Kentrell Loftin, Arthur Pogh, Ellen Revesz, and Laurence Wallace. Sweat is sponsored in part by Fairleigh Dickinson University. Special thanks to The Cottage Bar in Teaneck, NJ for use of the space for promotional photos.

The Black Box Performing Arts Center (home of Black Box Studios) continues to emerge as the Tri-State area’s premiere destination for both cutting-edge professional theater and collaborative performing arts education — in the heart of Teaneck, NJ— just a quick ride over the George Washington Bridge. Black Box was the recipient of the 2017 Teaneck Chamber of Commerce’s Cultural Arts Award, and currently serves on the Chamber Board as the Chair of the Cultural Arts Committee. In addition to main stage productions, Black Box PAC hosts special events including Open Mic Nights, Comedy Nights, and staged readings.