Circle Players and director Richard Butler of Piscataway are proud to present the fourth production of their 2018-2019 season, 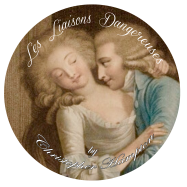 Former lovers La Marquise de Merteuil and Le Vicomte de Valmont, two merciless aristocrats, compete in games of seduction and revenge, toying with the hearts and reputations of innocents as they do. But when Merteuil incites Valmont to corrupt the convent-educated Cecile before her wedding night, events soon spiral beyond anyone’s control.