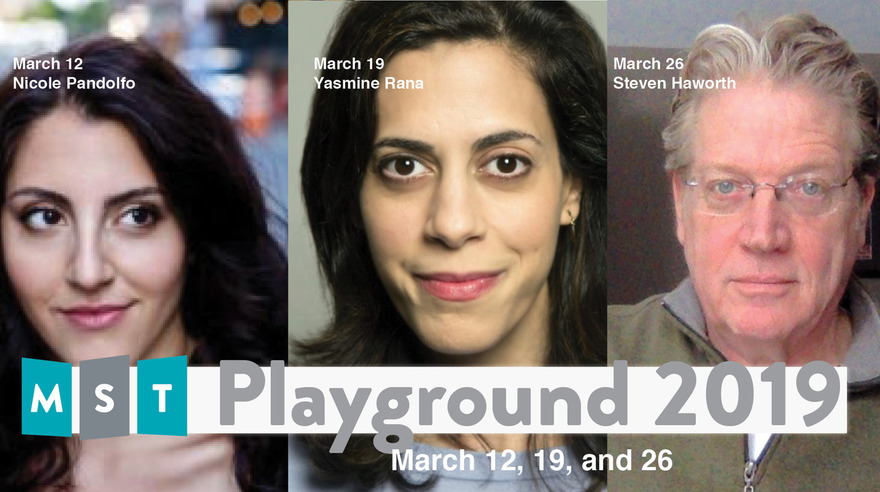 The Belle of Belmar

Join us for the first play in our MST Playground reading series. The Belle of Belmar by Nicole Pandolfo.

The Belle of Belmar is a coming-of-age story about Denise, an aspiring marine biologist and her best friend Crystal, who has a disability, navigating prom as outcasts searching for both independence and inclusion. Earlier in the school year Denise was a victim of an acquaintance rape by two of her classmates. Added to the mix is Denise’s mother, Lorna, who is just one more online purchase away from fixing her life, and Mikey, Denise’s ex-best friend with a big secret to hide. This is a provoking and humorous story about how we choose to move forward in our lives.

After Rome
by Yasmine Rana

After Rome takes place over the course of an afternoon at the Trattoria Europa in Rome on April 5, 2017, the 25th anniversary of the start of the Bosnian War. Lara a Bosnian professor of linguistics visiting Rome for a conference, seeks out her closest childhood friend, Anna, now an Italian resident and proprietor of Trattoria Europa. When Lara and Anna reunite at Anna’s establishment, the women engage in emotional discourse related to the origins of their parting, their Muslim heritage, Anna’s identity as an immigrant, Lara’s life in post-war Bosnia, the men they loved, and the city and people they lost.

Monkey in the Shade
by Steven Haworth

In Harvey, Louisiana in 1978, a man named Monkey works in the oil patch as a derrick man and lives in a bar/restaurant/boarding house called Clay and Minnie’s. Clay and Minnie’s is run by a violent ex-con named Clay Boudreaux and his wife Miz Minnie. Monkey is estranged from his family but works hard to send money to his ex-wife and two daughters. One day a teenage boy named Sean arrives. He has no money, no skills, is a college dropout, and was just kicked out of his home in Minnesota. He heard about the oil boom in Louisiana, that virtually anyone could get a job, and Clay and Minnie’s was the hangout to ask for one. Monkey tries to protect Sean as he gets more and more in trouble with Clay whose purposes are mysterious but whose violence is on display.