REVIEW: TAUT “PSYCHODRAMA” REVEALS WHAT LIES BENEATH THE FACADE WE SHOW OTHERS AND OURSELVES 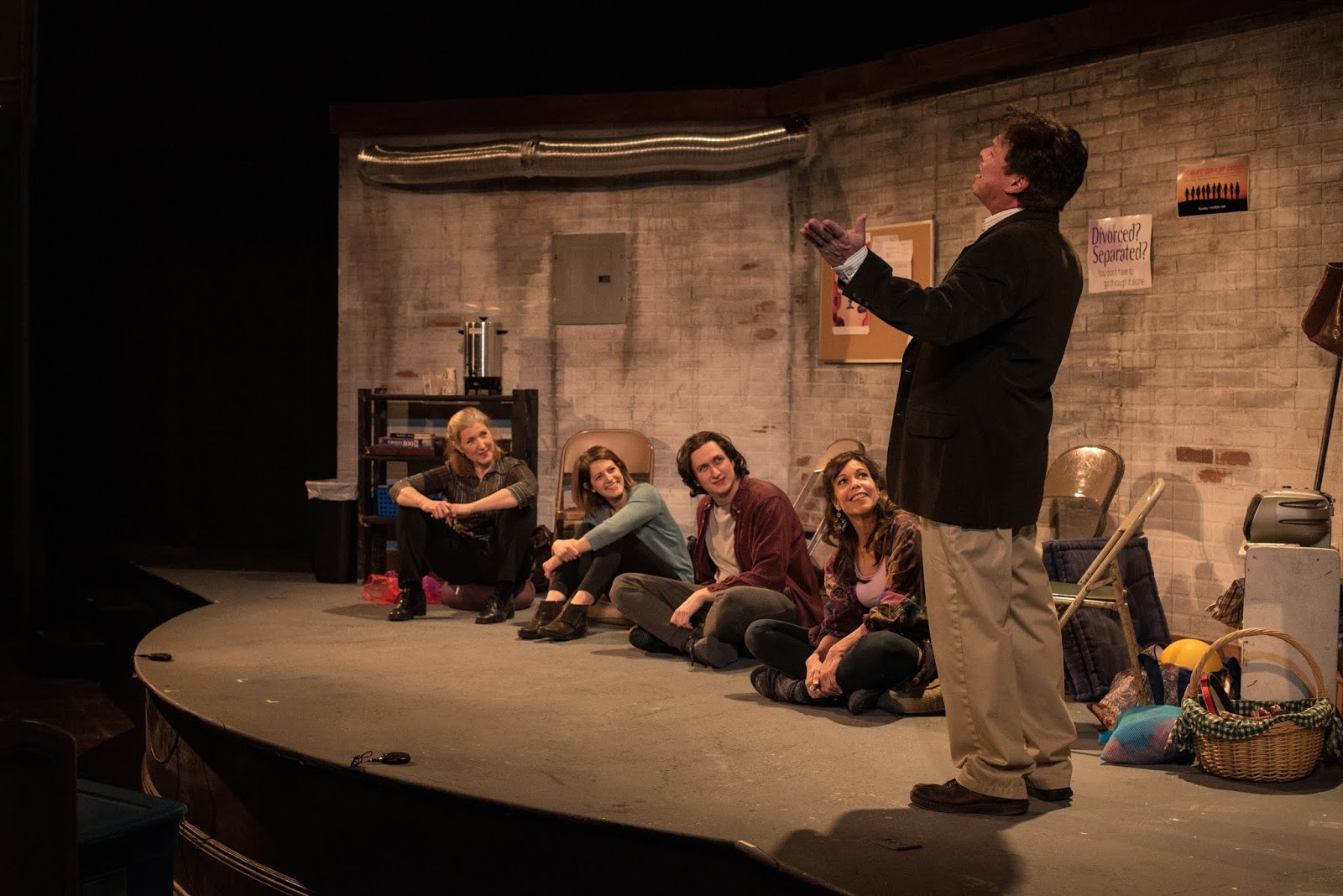 When going through a divorce, many people find group therapy helpful, the idea being that through leader-guided conversation, members of the group can help each other deal with the death of a marriage. Another way to help people about to be divorced, psychodrama is an experimental form of therapy that uses dramatic re-enactment to explore issues identified by the group, to empower the individual involved and find an alternate way to deal with psychological problems. Of course, such therapy is best guided by a trained professional; in the hands of an untrained leader, havoc can result. (Above, Laura Ekstrand, Becca Landis McLarty, Julian Blake Gordon and Harriett Trangucci listen as Harry Patrick Christian sings “The Age of Aquarius.”)

This latter is the premise of the comedy drama, aptly named Psychodrama, by Montclair playwright Phoebe Farber now receiving its world premiere at the Oakes Center by Dreamcatcher Repertory Theatre.

The plot involves a divorce group that is suddenly left stranded when their leader quits halfway through the program. Luckily, Barb has agreed to be the new group leader. Her unorthodox techniques initially upset the quartet, but they eventually find that being off balance might just lead to a new understanding of their relationships.

Director Betsy True moves the plot steadily through the 90-minute duration, eliciting stellar performances from the five cast members humanize and make more sympathetic their distasteful behavior. Becca Landis McLarty’s chirpy, always upbeat Mel is almost too good to be true, that is, until she reveals the truth about the break-up of her marriage. As 28-year-old Chuck, Julian Blake Gordon is sardonically flippant at first, but as the psychodrama peels away his façade, we see a young man more troubled by his relationship with his father than by the demise of his marriage. Laura Ekstrand’s “rage machine,” bullying Syl (above, with Dave) is so brittle and uptight that we fear she might break down before our eyes—she’s that unsympathetic—but she rises to the occasion when she reveals her situation and the group ultimately finds itself without a leader. And Harry Patrick Christian’s Dave is a good-hearted schlub trying to win back his wife who wants out but won’t leave the house. When he finally gets some nerve to confront her, we want to cheer his success. 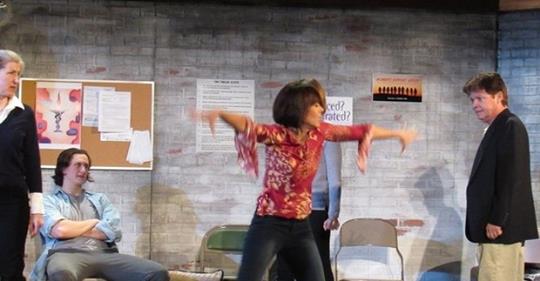 And finally, Harriett Trangucci  is once more superb as a rather ditsy Barb (above, explaining psychodrama), full of good cheer and optimism, distributing scarves and engaging the group in trust exercises. Trangucci is terrific at portraying such characters, digging deep below the wackiness to reveal a woman who so much wants something more than the life she now has that she resorts to deceit, a move that could wreak havoc with the psyches of the group members.

Dave Maulbeck’s set, a dreary all-purpose room in a Unitarian Church basement, casts a pall over the group meetings. Zack Pizza’s lighting adds to the appropriate dinginess, and Jeff Knapp’s sound features music suitable to each scene that charts the group’s progress (“Celebration” and “The Age of Aquarius” are just two). The costumes by Olivia Mastrangelo give expression to each character’s personality, with a jacket and briefcase for Dave, scarves and leggings for Mel, a slacker tee shirt and jeans for Chuck, more structured attire for Syl and bohemian dress for the free-spirited Barb. 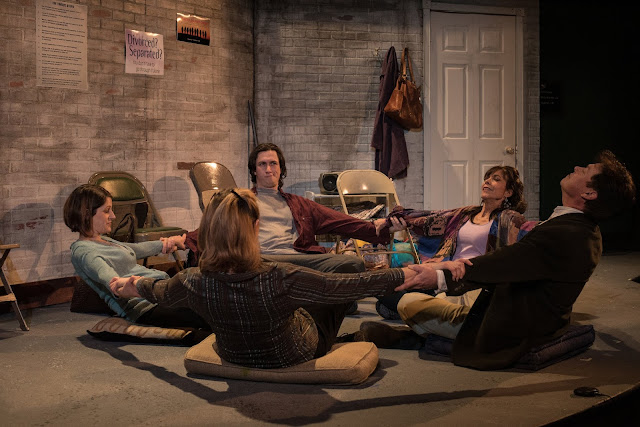 That Phoebe Farber is herself a psychotherapist lends sober veracity to the play, but she sure has an ear for the humor often present in fraught situations in dialogue that shouldn’t be funny but is when delivered with flippant irony by this group of very talented actors. Psychodrama gives us a glimpse of the human beings behind the disguise we often don to fool others—or ourselves. As these characters reveal their true selves, our own attitudes toward them change, giving us a clue about how to understand and deal with real people in our own lives and help them (and us) to successfully and honestly deal with life-altering events. Dreamcatcher Rep’s Psychodrama entertains and enlightens us, and isn’t that the goal of good theater? (Above: The group practices a “trust” exercise.)

Psychodrama will be performed at the Oakes Center, 120 Morris Avenue, Summit, through March 3. This is the final weekend, so you’ll want to reserve tickets by calling 908.5784.9654 or visiting www.dreamcatcherrep.org online.