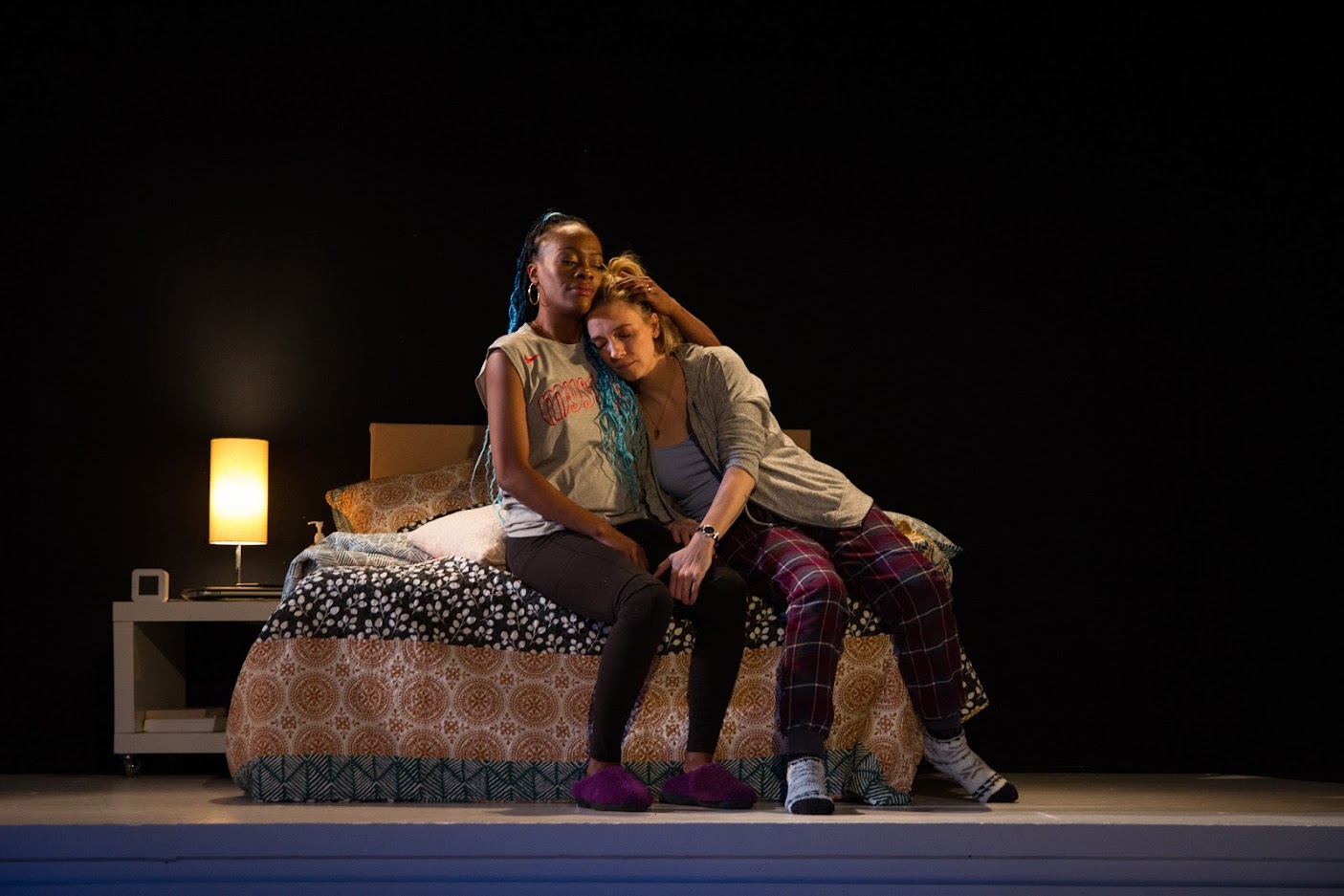 Inspired by an indistinct photograph of computer analyst Edward Snowden’s girlfriend, Christina Gorman’s play, Roan @ The Gates, now receiving its world premiere at Luna Stage, runs with that fact and deals with something most people never consider: the damage such acts can have on the whistleblower’s nearest and dearest family members and friends. (Above: Aaliyah Habeeb and Mel House)

In her fictional investigation into cyber security, Gorman’s complicates matters by making her protagonists a lesbian couple, both of whom are working to make the world a better place. Roan is data analyst for the National Security Agency while her wife Natalie is a human rights lawyer. When Roan dumps data collected on U.S. citizens post 9-11, the subsequent high-stakes situation lays bare the toll such secrecy takes on their personal relationship.

Director Michelle Tattenbaum keeps a tight rein on the dramatic proceedings to produce a riveting, engrossing study of a relationship about to go off the rails for the sake of national security. She’s aided by a two highly talented actors. Mel House is the tightly wound, studiously guarded Roan, who has just turned over 100 gigabytes of data to a British journalist associated with an organization called Transparency Now (analogous to Laura Poitras and the British newspaper The Guardian in the Snowden affair) to show the American people that their privacy is being violated by the government on a daily basis. House reveals Roan’s feelings through her tight body language (especially a metaphoric stomach ache) and by what she doesn’t say. A rather unsympathetic character, she self-righteously tries to define why she did it, going so far as to seek asylum in Russia when other countries refuse to do so.

As the more sympathetic Natalie, Aaliyah Habeeb utters Gorman’s dialogue naturally; her delivery during the opening telephone conversation is so convincing that we actually believe someone is on the other end! Indeed, the consequences of Roan’s actions fall squarely on Nat; people are taking sides, she has lost friends and clients, and, ultimately, her livelihood. That the same-sex couple couldn’t live comfortably and safely in Russia is not lost on her one bit, something Roan hasn’t considered. Habeeb’s pain at that realization is palpable. 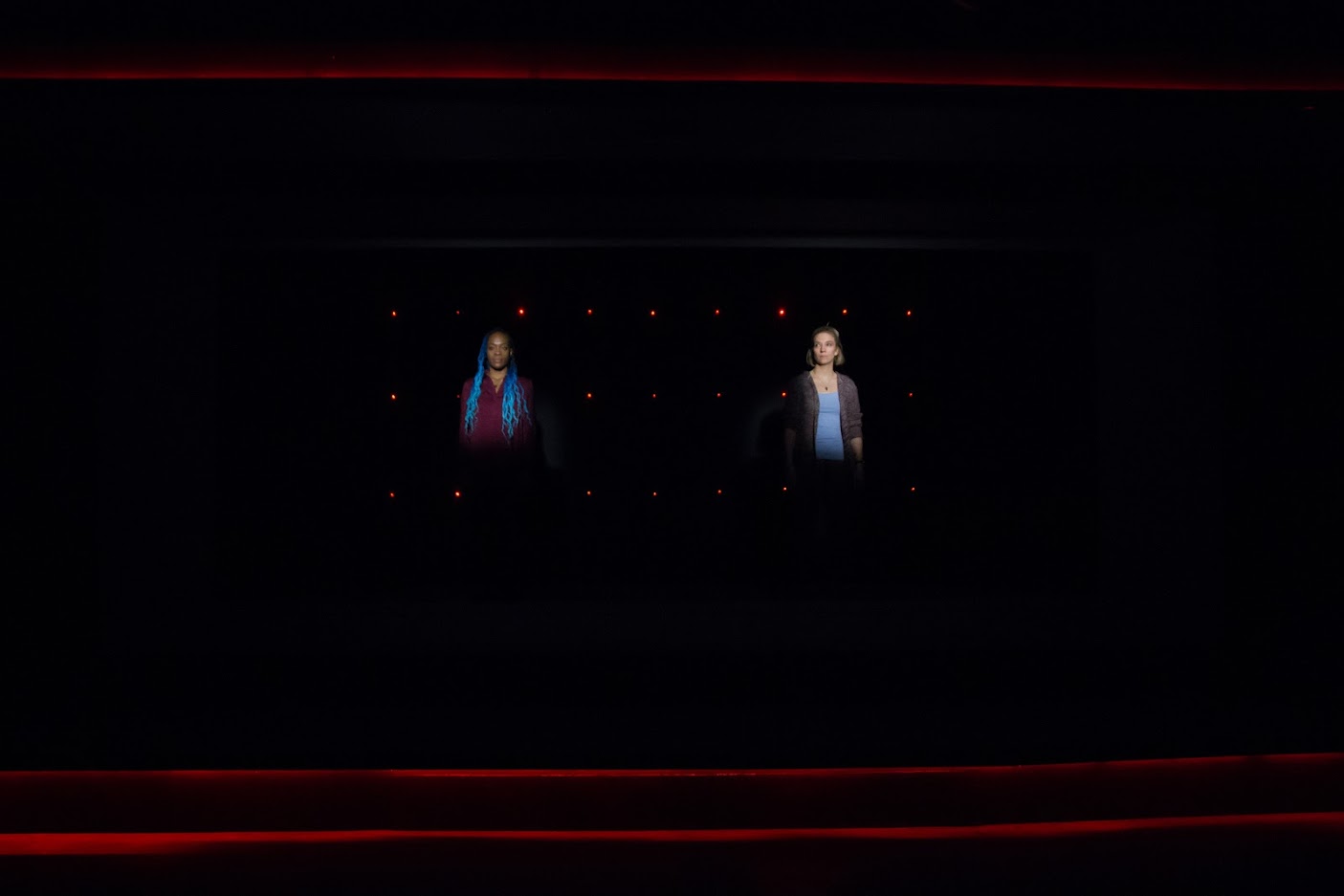 On a minimal set designed by Christopher and Justin Swader and evocatively lit by Marika Kent, the actors move effortlessly through scenes that range from Alexandria, Virginia, to a Moscow airport and to a safe house 90 miles from the Russian capital. One ingenious bit of staging has the couple sending each other emails, speaking the words as they “type” (above).

A note about Deborah Caney’s costumes: Natalie’s coordinated attire befits a confident woman who has her life and career under control while Roan’s messy hair and sloppy clothing telegraphs a person at war with herself—and her government.

So, is Roan a whistleblower or a traitor? While she exposes the extent of federal government spying on ordinary citizens, which could be a good thing, her actions could put the United States’ safety in jeopardy. Christina Gorman doesn’t ignore either view, but her focus on Roan’s personal betrayal of Nat shows a woman in love with her “grand gesture.” Even her reasons for doing so are suspect. Did she do it for country or to make Nat proud of her? That point should provide grist for a lively discussion over coffee or on the ride home from the theater.

Roan @ The Gates will be performed at Luna Stage, 555 Valley Street, West Orange, through February 24, Thursdays at 7:30 PM, Fridays and Saturdays at 8 PM, and Sundays at 3 PM. For information and tickets, call the box office at 973.395.5551 or visit www.LunaStage.org/Roan online.