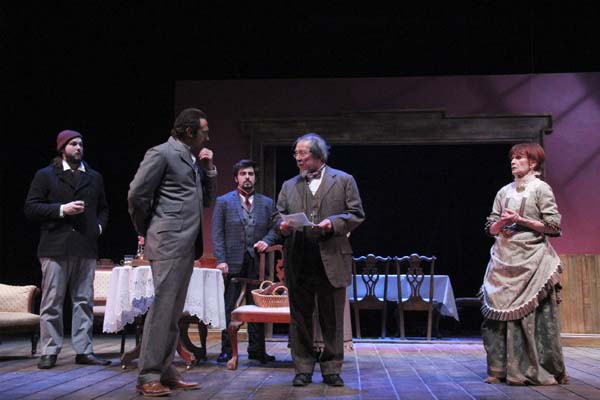 Centenary Stage Company is known for its excellent productions but it may be that Artistic Director Carl Wallnau has never picked a more pertinent production than Henrik Ibsen’s An Enemy of the People, which premiered Friday, Feb. 15 and runs through Sunday, March 3.

The play deals with water pollution, scientific data being ignored, property taxes, a property owners association, local politics, the corruption of the media and an examination of the true depth of people’s convictions.

Ripped from the headlines? Maybe in 1882 when Ibsen wrote it.

In the director’s note by Anne Occhiogrosso and Randall Duk Kim, they say: “Never has Henrik Ibsen’s voice needed to be heard more than now. As we face the frightening controversy regarding inexperienced leadership, governance of the super rich whose expertise rests in profit not people, a crumbling political system and dubious democracy, a critically endangered environment, an uniformed public, gender inequality, unsubstantiated fear of anyone different from ourselves and the new phenomenon of seemingly ‘fake news,’ Ibsen boldly holds a mirror before us.” (Top, left to right) Chris Kolwicz, Michael Gabriel Goodfriend, Nick Bettens, Randall Duk Kim and Colleen Smith-Wallnau)

The complicated plot is expertly brought to life by a superb cast featuring both Equity and Equity Candidate actors. In the translation by John Alan Wyatt, the rhetoric is eloquent and fast-paced. Lines that include the phrases “the shallow and stupid are the overwhelming majority,” “pestilence of lies” and “ignorance corrupts” give the Victorian drama a contemporary feel. 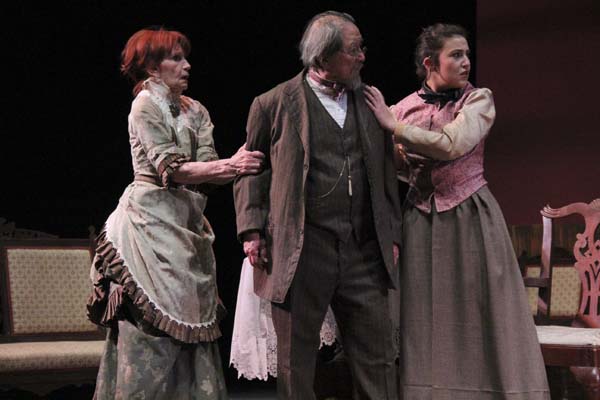 Randall Duk Kim is Dr. Thomas Stockmann, the titular enemy. He is appropriately angry, determined and honest. Colleen Smith-Wallnau and Brianna Morris aptly illustrate the gender inequality of the time (and ours?) Morris, as Petra Stockmann  loses her job because of her father. Smith Wallnau, as Stockman’s wife, is forced to make compromises. (Above: Colleen Smith-Wallnau, Randall Duk Kim and Brianna Morris)

It is easier for the so-called crusading newspaper editor Hovstad (Michael Gabriel Goodfriend), his staffer Billing (Nick Bettens) and the “moderate” property owners president Aslaksen (Michael Irvin Pollard) to compromise their supposed unshakeable opinions about the corruption of the people in power. Each actor performs the switch from ideologue to crass hypocrite like dancers in a ballet. 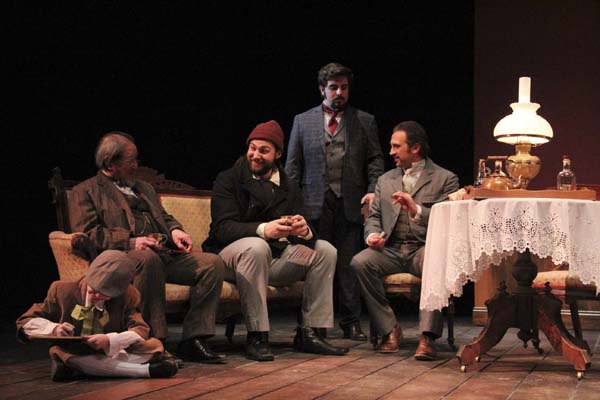 The anti-hero of the piece, Peter Stockmann (David Cantor), never changes his opinion that the facts stated by his brother are too dangerous to the stockholders in his precious Baths. Cantor plays the small-town mayor like he ran for office himself. (Left, left to right) Finley Vaniman, Randall Duk Kim, Chris Kolwicz, Nick Bettens and Michael Gabriel Goodfriend)

Chris Kolwicz as Horster, a ship’s captain, is subtle but strong.

The Victorian sets in the Sitnik Thestre are appropriately subdued, and the costumes reflect the coastal Norwegian setting.