The Chester Theatre Group is presenting what some consider "the greatest play ever written: William Shakespeare's King Lear.” Certainly, one of Shakespeare's most famous tragedies, the play has been widely adapted for the stage and motion pictures, with the title role coveted by many of the world's most accomplished actors, such as Ian Holm and Anthony Hopkins.

Lear would be a very ambitious production for most professional theatres, but, for a community theatre with only a local pool of non-professional actors available for this large cast production…….. it could have proven insurmountable. A BIG however, is the talent and experience, particularly with Shakespeare, of director Kevern Cameron. Cameron, or KC, has been able to cast King Lear with some of the finest area talent, many of whom have worked with him as director or actor. First and foremost, has to be his selection of veteran actor Christopher Gibbs (above, left) as Lear, King of Britain. Gibbs, with his nuanced performance ranging from a powerful, in control, monarch to an aging victim of dementia, raises the play and the handsome cast to a level that might be comparable to Off-Broadway. In other words, Gibbs is magnificent in this dark role. 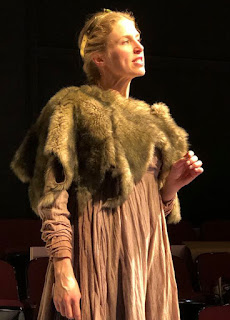 He is supported by a marvelous cast, many new to the CTG audience, they include in particular; Lisa Barnett as Goneril, Lear’s eldest daughter; Sky Spiegel Monroe as Regan (left), Lear’s second daughter;and Madelyn Barkocy (above, left) as Cordelia, the youngest daughter. As the play opens, the three daughters and the court are informed by Lear that he is weary of governing and has decided to reward his three daughters by dividing his kingdom into three parts. A big however, is his demand that each daughter  express  their love and devotion to him. The two oldest profess that there is no man they love more than their father. The third, and youngest, Cordelia chastises her sisters for declaring a greater love for father over husband. Even unmarried, she scorns this insincere display of affection. Lear is furious to the point he banishes her from the Kingdom. She gains an enormous consolation prize when her suitor, and King of France (Eric Craft), makes her his bride. 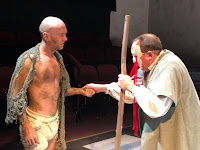 Her selfish, ambitious sisters are the principal villains, first when they turn their mad father out into the storm and then when they viciously put out the Earl of Gloucester’s eyes for his loyalty to the King. Matt Meier is spot-on as Gloucester, as is Derek Egidio as Edgar (right). Mark Harvey as the loyal Earl of Kent and Michael Yoder as Edmund an impressive villain. The King has no more loyal servant than his Fool (Court Jester) played with appropriate passion by Sarah Henley.  George LaVigne, Jack Roberts,  Keith Hoovler round out  this exceptional cast. The ensemble players (soldiers, guards, and servants) include Ted Holland, Jim Quikstad, and Amie Quivey.

This is a dark tragedy of the highest order… as Shakespeare presents us with possibly the most evil, dysfunctional family in his, or any other playwright’s portfolio… in short, this is not to be confused with a Neil Simon play. We suggest that you read a good synopsis of the play in order to fully appreciate this in-the round presentation.

Director Cameron (right) offers this advice: “Don’t go nuts trying to understand every word. Feel what the music says those words want to accomplish. I never intended to love opera, but unavoidable encounters made me love it. The music demanded I love it. I heard La Boheme in Italian but never had any doubt what was going on. The music taught me. Let your ears teach your eyes how, what, to see.”