WHEN: FEBRUARY 8 – 17, 2019; Friday through Saturday at 7:30pm and Sunday at 3pm
WHERE: The Mill Hill Playhouse, 205 E. Front Street, at the corner of Montgomery Street in Trenton, NJ. On-street parking will be available.
TICKETS: $27. Student, group and senior discounts available.
Both To My Unborn Child: A Love Letter from Fred Hampton and Bicycle Face contain adult language and themes.
To purchase tickets, call (609) 392-0766, or visit www.passagetheatre.org

Passage Theatre Company, Trenton’s Barrymore Award-winning professional theatre company, will present two plays this February as part of their audience-favorite Solo Flights series. To My Unborn Child: A Love Letter from Fred Hampton, written and performed by Richard Bradford and directed by John Doyle, will perform from February 8-10. Bicycle Face, written and performed by Hannah Van Sciver and directed by David O’Connor, will perform from February 15-17. 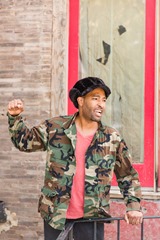 In To My Unborn Child, Richard Bradford revives the voice of Fred Hampton, a visionary Black Panther murdered by Chicago police at 21 as he lay by his pregnant lover. Hampton preached a humane, compassionate revolution against racist brutality, child hunger, poverty, and capitalism. This powerful play about change, love, and legacy sheds fresh light on a little-understood period of our country’s history, and was originally produced by Iron Age Theatre.

Set in Philadelphia and framed by a feminist theory class taught one hundred and fifty years in the future, Bicycle Face takes audiences on a multidisciplinary, multimedia theatrical joyride through the feminist movement and its unlikely relationship with the bicycle. Using live music, projections, and puppetry, Hannah Van Sciver navigates the ever-changing landscape of feminism, censorship, and cycling. This show was originally developed and produced by The Greenfield Collective.

Passage’s Artistic Director, Ryanne Domingues, says, “I saw To My Unborn Child: A Love Letter from Fred Hampton in the 2017 Philadelphia Fringe Festival and was blown away by this part of history that I had never heard before. I had learned about the Black Panthers in my high school history class, but this show gives us their story through the lens of one incredible man, and reminds us how relevant their legacy is to what is happening today. Similarly, when I came across Bicycle Face, I was immediately intrigued by how the history of women’s cycling tells a much broader story about gender in today’s world. Both of these shows remind us how important it is to know our past so that we can better navigate our present and change our future.”

“To My Unborn Child: A Love Letter from Fred Hampton was conceived for the purpose of engaging folks in a conversation of ideas,” says Richard Bradford, the play’s writer and performer. “And to shed light on an important but not often talked about hero.” Passage is thrilled to welcome him back after his appearance in this season’s hit Salt Pepper Ketchup.

Hannah Van Sciver says, “I first wrote and performed Bicycle Face in 2015 – I’d read an article online about this invented woman’s malady from the 1890s, and it became this glorious entry point for thinking about “women” and “feminism” in the past, present, and future. Every time I resurrect the show, it has to change a bit, to stay in conversation with the present. Ultimately, Bicycle Face presents snapshots of three women trying and sometimes failing to fight the patriarchy with the tools of their time period. It examines how, as things get easier, sometimes they get much harder too.”