The Waltuch Gallery at the Kaplen JCC on the Palisades presents

WHEN: January 1-31. Gallery hours are Monday – Thursday, 9 am - 10 pm; Friday and Sunday, 9 am – 4 pm (in winter); closed Saturday and Jewish holidays.
WHERE: Kaplen JCC on the Palisades Waltuch Art Gallery, located at 411 E. Clinton Avenue in Tenafly, NJ
ADMISSION: All gallery exhibits and receptions are free and open to the community, where JCC membership is not required. 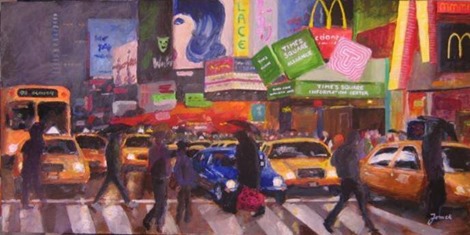 After experimenting with pastels and oils, David Zomick discovered acrylics and developed his skills in this vibrant and accessible medium. His paintings are generally realistic, though he occasionally paints something that is abstract or decorative. Despite the fact that David only began painting when he retired as a successful leader in aerospace technology 15 years ago, his work has been met with significant critical acclaim. His paintings and sculptures have won dozens of awards in juried competitions. He recently won first place awards in the Focus New Jersey Open Juried Art Show, Celebrating Bergen County’s Diversity Exhibit, and the New Jersey Juried Senior Art Competition. He is a member of the Northern New Jersey Art Affiliates and has had one-man exhibits at Fairleigh Dickenson University’s Weiner Library and the Kaplen JCC on the Palisades in 2011. His work has also been exhibited at Marcella Geltman Gallery and local public libraries in Teaneck, Englewood and Dumont. 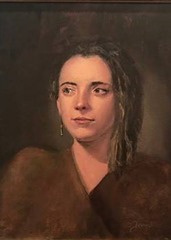 “My objective, when I begin a painting, is to portray reality in a way that will make the painting more interesting to the viewer than reality itself,” says David. “I may try to make it more beautiful by varying color or form; more mysterious by exaggerating the lights and darks; or more interesting optically by creating a balanced (or disconcerting) composition. As I proceed with a painting, it is a constant struggle. My education as a physicist and my career as an aerospace technologist would have me portray precisely what I see, in excruciating detail, with no embellishment or personal commentary. I need to constantly remind myself that my camera can achieve that far more efficiently and effectively than I can. When I look at a finished painting and conclude that my camera could ‘never do that,’ I am happy.” 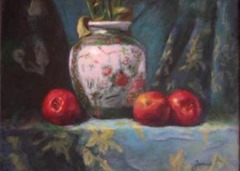 David continues to study at the Art Center of Northern New Jersey, primarily with John Varriano and Cesar Jarez. He also sculpts in marble and alabaster, with artist/instructor Natalie Frier, and studied ceramic sculpting with Martin Glick at the JCC. David holds a Ph.D. in Theoretical Physics and a Masters in both Physics and Business Administration. He’s been a member of our JCC since 1991 and spent his entire career with Honeywell International – the world’s largest producer of aircraft and spacecraft electronic systems. Among the positions he held were VP of Engineering, Chief Scientist, and VP of Program Management. A resident of Teaneck NJ, David and his wife live within walking distance of their three married children. They have 13 grandchildren and four great grandchildren, all of whom have been the subjects of David’s paintings and drawings. David’s hobbies include playing the piano and tennis.

For more information on gallery exhibitions, contact Nina Bachrach at 201.408.1406 or nbachrach@jccotp.org.