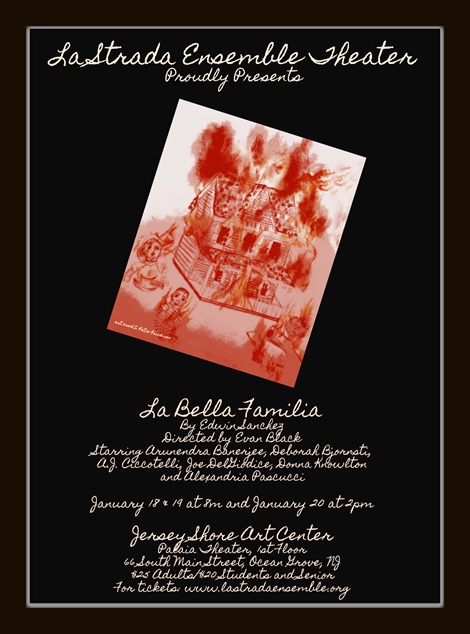 La Strada Theatre Ensemble is one of New Jersey’s premiere developmental theatre companies that brings together theatre artists from the tri-state area with playwrights from throughout the United States. LA BELLA FAMILIA  is a past the winner of the National Latino Playwriting Award. The National Latino Playwriting Award annually recognizes an outstanding work by a Latino playwright written on any subject.

LA BELLA FAMILIA deals with a Puerto Rican hit woman and the gentlest man in the world who move next door to the neighbors from Hell, and everyone learns, the hard way, that family comes first. Edwin Sanchez, a graduate from Yale Drama School, says about the play’s origins, "I thought about this woman whose world was nothing but violence and how would she be as a mother. I also thought about this very gentle man and how his gentleness drew her to him. And then the child and how defending the child became the most important thing in the world. This play started with the scene where Benny first meets Linda and Guy and Bebe. I was auctioned off! It was at New Dramatists, and they had a fund raiser where people bid on playwrights and we would write a scene based on a real life event of their. The people I got said they had the neighbors from Hell, and I was off and running!"

Edwin's Sanchez recent productions of his plays include UNMERCIFUL GOOD FORTUNE and TRAFFICKING IN BROKEN HEARTS, both in Los Angeles as well as the world premiere of the romantic comedy I'LL TAKE ROMANCE at the Evolution Theatre in Ohio. Other productions include: DIOSA, produced by Hartford Stage after a successful workshop by New York Stage and Film, TRAFFICKING IN BROKEN HEARTS at the Bank Street Theater in New York, UNMERCIFUL GOOD FORTUNE at the Intar Theater in New York, for which he received the Princess Grace Playwriting Award in 1994, and BAREFOOT BOY WITH SHOES On at Primary Stages in New York. This play was selected by the Eugene O'Neill Playwrights Conference to represent the National Playwrights Conference at the Schelykovo Playwrights Seminar in Russia; ICARUS produced by Fourth Unity, Actors Theater of Louisville as part of their Humana Festival, San Jose Rep and regionally throughout the U.S.; and TRAFFICKING IN BROKEN HEARTS, Atlantic Theater in New York, and productions in Brazil and Switzerland. He was also among the playwrights involved with Brave New World, an organization commemorating the events surrounding September 11th. www.edwinsanchez-writer.com. Edwin is on the playwriting faculty at Primary Stages in New York City.