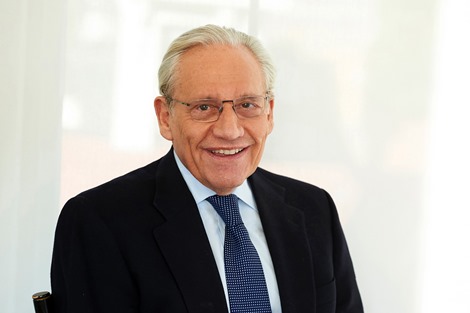 An Evening with Bob Woodward—The State of the American Presidency

WHEN: Monday, December 10, 2018, 8pm
WHERE: State Theatre NJ, 15 Livingston Ave., New Brunswick
TICKETS: $35-$85
For tickets, more information, or group discounts, call State Theatre Guest Services at 732-246-SHOW (7469), or visit us online at STNJ.org. State Theatre Guest Services, located at 15 Livingston Ave, New Brunswick NJ, is open Monday through Friday from 10am to 6pm; Saturday from 1pm to 5pm; and at least three hours prior to curtain on performance dates unless otherwise specified. Additional ticket and transaction fees may apply.

State Theatre New Jersey presents An Evening With Bob Woodward - The State of the American Presidency. Moderated by Governor Christine Todd Whitman, Woodward provides a behind the scene look into his 47 year career from Watergate to his latest book, as well as the current state of politics.

Iconic investigative journalist, Bob Woodward has worked for The Washington Post for 47 years and is the winner of nearly every American journalism award, including two Pulitzers—the first with Bernstein for their Watergate coverage and the second as the lead reporter for the Post's coverage of the September 11, 2001 terrorist attacks. He is a reporter-historian with an aggressive but fair and non-partisan reputation for digging deep to uncover Washington’s secrets. He captivates audiences with stories that are sometimes surprising, at times shocking, and always fascinating. Woodward helps people get behind the spin to understand what’s really going on in the halls of power in an age of 24-hour news, social media, and snarky politics.

He is the author of 13 #1 bestsellers—more than any contemporary nonfiction writer—and 19 bestsellers including his latest, FEAR: Trump in the Whitehouse. He has written articles and books about the last nine presidents from Nixon to Trump.

Bob Woodward's FEAR: Trump in the White House, is the most detailed and penetrating portrait of a sitting president in the first year of an administration. FEAR sold more than 1.1 million copies in its first week in the United States, breaking the 94-year first-week sales record of its publisher Simon & Schuster. During this show Woodward will provide an inside look into the Trump presidency.

In 2014, Robert Gates, former director of the CIA and secretary of defense, said of Woodward, “He has an extraordinary ability to get otherwise responsible adults to spill [their] guts to him . . . his ability to get people to talk about stuff they shouldn’t be talking about is just extraordinary and may be unique.” That is Woodward’s true gift and audiences who hear him speak leave transfixed by what they’ve learned.

Christine Todd Whitman is the President of The Whitman Strategy Group (WSG), a consulting firm that specializes in energy and environmental issues. Governor Whitman served in the cabinet of President George W. Bush as Administrator of the Environmental Protection Agency from January of 2001 until June of 2003. She was the 50th Governor of the State of New Jersey, serving as its first woman governor from 1994 until 2001. She is the author of a New York Times best seller called It’s My Party Too, which was published in January of 2005.

Governor Whitman serves on the Board of Directors of United Technologies Corporation, and she formerly served on the Boards of Texas Instruments Inc. and S.C. Johnson and Son, Inc. She is a member of Terrestrial Energy’s International Advisory Board and holds an Executive Masters Professional Director Certification from the American College of Corporate Directors. She is on the Advisory Boards of the Corporate Eco Forum and The Northeast Maglev (TNEM). Governor Whitman also serves a number of non-profit organizations including as Chairman of the American Security Project and Vice-Chairman of the Trustees of the Eisenhower Fellowships. She is a Board member of the Center for Responsible Shale Development and she co-chairs the Joint Ocean Commission Initiative Leadership Council. She is a member of the National Advisory Committees for the Women’s Coalition for Common Sense and the Presidential Climate Action Project, and a founding member of the Climate Leadership Council.