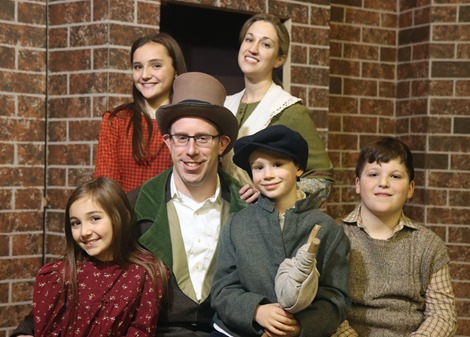 WHEN: December 7, 8, 14, 15, 20, 21 & 22 at 8PM and December 8, 9, 15, 22 & 23 at 3PM.
WHERE: Chatham Playhouse, 23 North Passaic Avenue, in Chatham
TICKETS: $25 for adults and $23 for youth/senior. The theater expects this show to sell out and encourages people to reserve their tickets early.
Tickets can be purchased online by accessing the theater’s online ticketing service, where you can now reserve your particular seat, simply go to ccp.booktix.com. The service is available 24 hours a day. For information regarding box office hours, please call the box office number at (973) 635-7363. Patrons with special needs requiring seating accommodations should contact the Playhouse at least 24 hours prior to the performance. Without prior notice, accommodations cannot be guaranteed.

Come celebrate 30 years! The Chatham Community Players keeps their longstanding holiday tradition alive with the 30th anniversary production of A Christmas Carol, an original musical version of the Tale, adapted from the Dickens text and Charles Dickens letters and journals by Philip Wm. McKinley and Suzanne Buhrer. Returning to the Chatham Playhouse, Jeffrey Fiorello of Montclair directs the show; Jack Bender of Jersey City is the musical director and Samantha Hahn of Plainfield is the Choreographer. 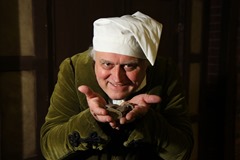 In this version, produced exclusively at the Chatham Playhouse since 1988, Dickens serves not only as narrator, but also as a character that befriends Scrooge and walks beside him during his life-changing journey through memories and premonitions. While the script remains true to the original story, the playwright also pulled from letters that Dickens wrote to family and friends. The story of Ebenezer Scrooge (Alan Semok, above) has become one of the most beloved of all holiday tales, and this unique production also reminds us that Dickens’ inspiration for penning the story goes much deeper.

Carol has become a tradition in Chatham for all concerned—cast, crew and audience. There are people who first came to see the show with their parents when they were young. Now, they come to share the experience with their own children. We have cast members who have grown up—from one role to another—doing A Christmas Carol and some of us have grown old working behind the scenes. Producing Carol for a fourth time, Bob Denmark added that “this show is our gift to our community, in two different ways. We have seen how it brings joy, and hope, to those who come together with us to celebrate the transformation of Ebenezer Scrooge. Our continued productions of A Christmas Carol are not only a holiday present, but a present that keeps on giving throughout the year and throughout the years.”

The large and talented cast includes actors from all around New Jersey: Chip Prestera of Stirling, Alan Semok of Somerset, Scott Baird of Rockaway, Michelle and Owen Finnerty of Bernardsville, Will Carey of Bloomfield, Ken Magos, Jody, Zander and Parker Ebert all from Maplewood, Christina Eliades of Wayne, Howard Fischer of Berkeley Heights, Joelle Bochner and Eila Francis of Springfield, Leslie Williams of Summit, Allen Ellis of East Hanover, Andrea Thibodeau of Westfield, Adelaide Prekopa of Ringwood, Rory and Robert Lincoln of Mendham, Samantha Paparo of Chatham, Alexia and Zoe Davies of Kinnelon, Lucas Schultz of Warren and Michael Barthel of Bedminster.  As a special surprise appearance, there may even be a guest actor/actress from a past production of A Christmas Carol during several performances.

This marks the 19th time in 30 years that the Chatham Players has produced this show. From 1988-1995, the group produced the show every December, and it now produces the show on a biennial basis. This unique production has become a popular family tradition for many in the area—entertaining more than 35,000 audience members since 1988. After presenting the show essentially the same way since 1988, Chatham Players re-staged the show in 2005, 2008 and 2016 giving it a new look and feel. This production will feature a fresh look for 2018 courtesy of the combined talents of Roy Pancirov’s new set design and Dean Sickler’s Scenic Artistry. Our current production focuses on the joyous uplifting message that Dickens intended, with all the music that our audiences have found so enchanting over the years. 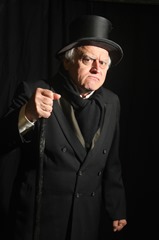 Audiences will get their share of familiar faces, as this cast has numerous of returning actors seen in past productions of this version of “Carol.” This year’s production marks the 22nd anniversary of Alan Semok’s first appearance as Ebenezer Scrooge (left). The show will have audience members leaving the theatre with the "true Christmas spirit," and will remind each and every one of them to embrace the joy and happiness associated with the holiday season. One of the actresses, Leslie Williams, was in the original cast as Belle and now she returns to play the Charwoman. When asked how it feels to be returning to this show three decades later, she said, “I was afraid the experience of doing it again would pale in comparison to my early experiences. I was wrong. This has proven to be every bit as special as it was 30 years ago, and I am honored to be working with such a talented, dedicated and caring team as has been assembled this year. It feels very much as if I have come home for the holidays.”

Fiorello shared, “I hope that audiences will come see this production, and makeA Christmas Carol a part of their holiday tradition. A story like this, with its themes of: a second chance, re-birth, humanitarianism, forgiveness, compassion, love, family values, and hope, are timeless, as timeless as Christmas itself.”

The Chatham Community Players has been entertaining residents of Morris County and the surrounding area since 1922. The organization’s mission is to produce high-quality theater for a diverse audience, while elevating its standard of excellence and providing a creative outlet with educational opportunities and outreach programs. For more information, including details of CCP’s 2018-2019 season, visit www.chathamplayers.org. Funding has been made possible in part by Morris Arts through the New Jersey State Council on the Arts/Department of State, a Partner Agency of the National Endowment for the Arts.