The Strollers Set to Host Two Nights of Fundraising Fun 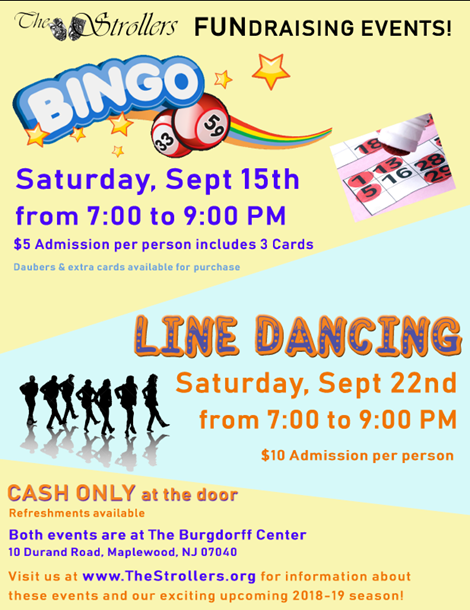 This month, the Strollers are ready to put the “fun” back in fundraising! The Maplewood-based troupe has announced that this year’s fundraiser will consist of back-to-back Saturday evening events:

The two fundraisers are actually more similar than one might think, explained Strollers president Judi Gajary. “Both bingo and line dancing have experienced a resurgence over the past few years. Their popularity with all ages and with families as well as singles is undeniable, and we think both are great fits for our membership and supporters.”

First up is Bingo Night on Saturday, September 15 from 7 to 9 p.m. Admission is $5 and includes 3 cards. Daubers and additional cards may be purchased at the event. Fabulous prizes range from a share of the pot to merchandise and services donated by local businesses. A portion of the proceeds will be donated to the Montclair Studio Players to help with their flood recovery efforts.

An Evening of Line Dancing to an eclectic mix of Western and other popular music will follow on Saturday, September 22 from 7 to 9 p.m. Admission is $10 per person. A professional instructor will be on hand to demonstrate moves.

Both events will be held in the community room of the Burgdorff Center, 10 Durand Road in Maplewood.

The Strollers of Maplewood was established in 1932 "to provide an opportunity for artistic and dramatic education and enjoyment for its members and the community."

The troupe’s 87th season will consist of Ken Ludwig’s comedy/mystery The Game’s Afoot, or Holmes for the Holidays (November), Casey Bell’s heartwarming children’s play The Day the Rainbow Broke Up (February), Arthur Miller’s adaptation of the classic Ibsen drama An Enemy of the People (March), and the much-beloved musical Fiddler on the Roof by Jerry Bock, Sheldon Harnick, and Joseph Stein (May).