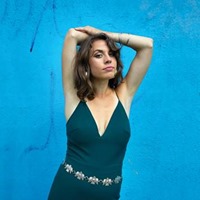 Rachel Ana Dobken: When It Happens to You

Dobken blends an intoxicating concoction of jazzy soulfulness and indie rock janglyness…. It's the sound of someone who doesn't just have a pretty, vibrato-filled voice, but actual soul behind it." —Heavy Blog is Heavy

Asbury Park Indie-Soul goddess Rachel Ana Dobken releases new single, “Always,” from her upcoming album, When It Happens to You, out this fall. The first single, “Understand,” premiered exclusively on Relix.com, which they hailed as “smoky” and “shimmering”. Dobken played drums, guitar and sang on this latest track. She also wrote, arranged and produced it, as well as the entire album. Listen to "Always"

The multi-talented artist has a knack for blending indie-rock, soul and jazz throughout her music, describing herself as “My Morning Jacket meets Lake Street Dive.” She’s been featured by The Aquarian Weekly, The Deli Magazine, NJ Arts, Relix Magazine, New York Times, Asbury Park Press, Travel+Leisure and more. All photographs for the record were taken by famed rock photographer, Danny Clinch, who has worked with Bruce Springsteen, Neil Young, My Morning Jacket, Ryan Adams and many more. Rachel works closely with Clinch as his Music Director at his Transparent Gallery in Asbury Park.

Dobken is a quadruple threat (drums, guitar, vocals and piano) and studied jazz at Bard College. Her music is raw and honest with a stage presence so emotionally captivating it's been compared to the likes of Janis Joplin and Jeff Buckley. Catch her live at her pre-release show at Asbury Lanes with The Mercury Brothers on September 8th, and stay tuned for more music from her impending album!

Dobken has a knack for blending  jazz, rock and soul throughout her music, describing herself as “Amy Winehouse meets My Morning Jacket.”

All photos and album art for the record were taken by Danny Clinch, who has photographed Springsteen, Neil Young, Bob Dylan, Stevie Nicks, Foo Fighters, My Morning Jacket, Ryan Adams and so many more. He is also the creator of Sea.Hear.Now festival, taking place in Asbury Park next month. Dobken has been featured by The Aquarian Weekly, The Deli Magazine, NJ Arts, Relix Magazine, New York Times, Asbury Park Press, Travel+Leisure and more.