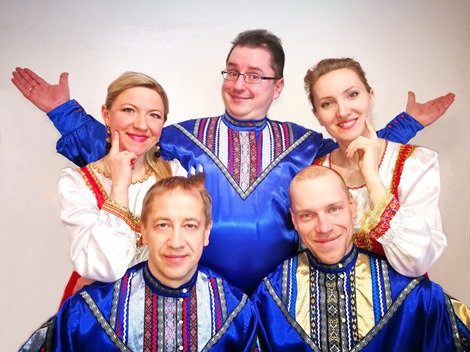 WHEN: Monday September 12, at 7:30 PM
WHERE: Grace Church, 4 Madison Ave. at Kings Rd. Madison
ADMISSION: by donation at the door.

LYRA is a community of professional musicians. Most members are students or postgraduates of Saint-Petersburg Conservatoire, working in different choirs of Saint-Petersburg. Though the members represent different musical professions: choir conductors, opera singers, instrumentalists, music teachers—they are all united by love for choir and ensemble singing. The choir community LYRA includes about 25 people who usually tour in small groups of soloists consisting of 4-6 people.  In 2001 they were awarded the Montreux (Switzerland) international choral festival diploma. In 2005 they were winners at the Coleraine International Choral Festival (Northern Ireland).

The main goal of LYRA is exploring and popularizing Russian choir music. Through performances, they introduce the enormous musical heritage of the Russian Orthodox Church, as well as traditions of Russian folk music. Music ranges from ancient songs of the Orthodox Church to works of little-known, but remarkable composers of the XVIII-XX centuries, as well as famous masters—Bortnjansky, Tchaikovsky, Tchesnokov, Gretchaninov,  Rachmaninov, Stravinsky and others.

Members of the Grace Church Adult Choir and School Choir II (6th grade and up) and Harmonium Choral Society will join them for the finale of the first half of the concert in a work by Rachmaninov.

For the second half of the concert the quartet, in traditional dress, will perform different folk songs of lyric, dancing and ritual nature, as well as their own arrangements of folk songs, as well as secular songs of Russian classics, such as Taneyev, Tchaikovsky and Rakhmaninov.

Please come on out for this rare international opportunity right here in Madison NJ! For more information call 973-377-0106.