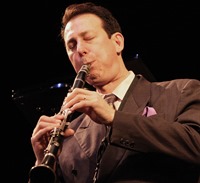 WHEN: one night only on Thursday, August 2 at 7:30 pm.
WHERE: Bickford Theatre, 6 Normandy Hgts. Rd., Morristown
TICKETS: $18 for museum members and $20 for everyone else.
Tickets may be purchased online at morrismuseum.org, by phone at (973) 971-3706, or in person at the Bickford Theatre Box Office. The Morris Museum’s Bickford Theatre is located at 6 Normandy Heights Road in Morristown, NJ, and offers free parking and full accessibility. Box office hours for phone sales are Monday through Friday, 10:00 am to 5:00 pm. Walk-up hours are Tuesday through Friday, 11:00 am to 5:00 pm.

For his annual appearance at the popular festival, Levinson dispenses with music scores and stands for a jam session in the tradition of the legendary jazz clubs of the forties and fifties such as Eddie Condon’s and Nick’s. Joining the popular clarinetist will be Jon-Erik Kellso on trumpet, Harvey Tibbs on trombone, Mark Shane on piano, Rob Adkins on bass, and Paul Wells on drums. And as customary, the concert will be preceded by a food truck picnic. (Above: Photo by Tom Salvas)

Dan Levinson has become one of the most prolific musicians in jazz today, performing or recording with a who’s who of top artists including Dick Hyman, Mel Torme, Wynton Marsalis, Bria Skonberg, and Randy Reinhart. Last fall, Dan was honored with the Hot House Jazz Magazine Fans Decision Award as Best Clarinet and he has appeared on more than 140 CDs, including nine as a leader. Although based in New York, he performs around the world and has become one of the most popular artists at the Bickford Theatre with his performances regularly selling out.

Trumpeter Jon-Erik Kellso has been a first call musician since moving to New York from his hometown of Detroit in 1989 to join Vince Giordano’s Nighthawks, with whom he continues to perform. He has also performed and recorded with an impressive roster of top musicians including Ralph Sutton, Ken Peplowski, Wynton Marsalis, Wycliffe Gordon, Marty Grosz, Milt Hinton, Dick Hyman, Linda Ronstadt, Madeleine Peyroux, Bob Wilber and Kenny Davern.

Trombonist Harvey Tibbs had a more than 20-year career at West Point as a member of the famed Jazz Knights. Since leaving West Point, Harvey has enjoyed a successful freelance career appearing with such prominent artists/bands as Tony Bennett, Louis Bellson, the Buck Clayton Orchestra and the Hudson Valley Swing Band. His Broadway show credits include “42nd Street” and “Chicago.”

Jazz Lives called Mark Shane “one of the finest jazz pianists alive,” a compliment echoed by fellow musicians and fans alike. His piano style is rooted in the tradition established by jazz masters such as James P. Johnson, Fats Waller, Teddy Wilson, Count Basie, Earl Hines, and Art Tatum. While developing his solo style, Mark served an extended tenure at the house pianist at the iconic Eddie Condon’s in New York City, adding a distinctive new piano voice to the Condon tradition of hot ensemble playing. He has worked with luminaries such as Benny Goodman, Buck Clayton, Buddy Tate, Bucky Pizzarelli, and many alumni from the great bands of Louis Armstrong, Count Basie, Duke Ellington, Tommy Dorsey, and Glenn Miller.

He may have just turned 35, but it seems like bassist Rob Adkins has been on the New York City jazz scene for many years, having turned up with many different groups from Emily Asher’s Garden Party to Mona’s Hot Four.

And the same can be said for drummer Paul Wells who is a member of Vince Giordano’s Nighthawks but has performed with an impressive list of musicians including Deborah Harry, Elvis Costello, Diana Krall, Randy Brecker, Mark Murphy, Ann Hampton Callaway, Norman Simmons and Houston Person.

“For most of my performances at the Bickford we’ve used written music and music stands,” said Dan Levinson. “But jazz is improvisatory by nature – an expression of the artist’s individual style – and the pioneers of jazz weren’t reading from printed scores. So for my August 2nd concert, we’re dispensing with the written music. I’ve assembled some of my favorite musicians and I’m going to turn them loose for an all-out, freewheeling jam session in the tradition of the legendary Greenwich Village jazz clubs of the ‘40s and ‘50s such as Nick’s, Eddie Condon’s , the Stuyvesant Casino, and Central Plaza. The Bickford audience is in for a real treat!”

Preceding the concert will be the popular Food Truck Picnic. On August 2, the trucks will include Empanada Lady, a Verona-based truck with a five-star reputation, the Morristown Green’s always popular Colonial Grill, and the return of Mike’s Ice Cream, a Good Humor truck with a sparking personality. The trucks start selling at 5:30.