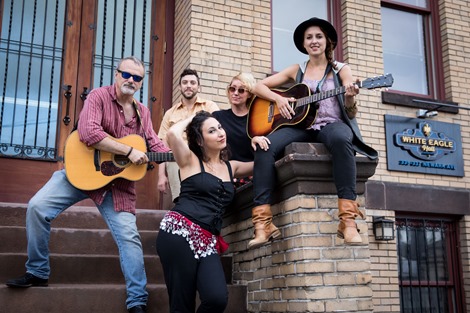 The premier edition of what is destined to become an annual event features a unique lineup of musicians, singers and songwriters who hail from the diverse corners of the thriving and always eclectic Jersey City music scene.

Not only are well-known artists such as Shayfer James, Kelly Saint Patrick and Sylvana Joyce featured performers, but JC Wave Fest also presents the White Eagle Hall premiers of After School Activities and Spaghetti Sessions—“underground” musical collectives that have garnered growing followings for their memorable evenings of original, provocative music—written and performed by a very local mix of newcomers, rising stars and scene veterans.

This unique collection of musical talent have come together to support the arts in Jersey City. All proceeds from JC Wave Fest at White Eagle Hall go to JCTC programing, helping to subsidize the many free and/or affordable events—art openings, readings, performances and other programming—JCTC will present in its upcoming season.

“One way JCTC serves Jersey City is by giving opportunities wide range of artists from our community,” said Olga Levina, Artistic Director, JCTC. “The JC Wave Fest brings together original talent for an evening of diverse music and performances at White Eagle Hall.”

Instead of the usual bars, galleries and raw studio spaces where many of these artists typically perform, the JC Wave Fest gives both their fans and local music scene aficionados the rare opportunity to experience this thrilling, original music in an optimum live concert setting: the newly restored, historic White Eagle Hall with its cutting-edge sound & lighting system, comfortable, inviting atmosphere, barrier-free sightlines and full bar.

Songwriter and keyboard extraordinaire Shayfer James, accompanied by his long-time drummer Corby Hewson and local Jersey City bassist Donovan Cain, will perform several songs from March of Crows, a song-cycle inspired by Jersey City murals. "There is something really exciting and special about performing songs in this city that exist only because of it and the incredible arts community here,” said James. “JCTC is such an amazing supporter of artists and it's a pleasure to support them in all their efforts."

Kelly Saint Patrick, one of Jersey City’s most beloved singer-songwriters, returns to her adopted hometown for the JC Wave Fest. She lived in Jersey City for 13 years as she built an international following through two well-received albums, local shows, tours and soundtrack spots. Thousands now follow her travels and exploits on social media, which recently included a handful of European shows. Throughout this past year Kelly has released multiple tracks, available everywhere online, as part of her latest work under Soda Box Music. Her JC Wave Fest appearance will be her first concert in the United States in more than two years, the opening date of a soon to be announced ‘official’ homecoming tour.

“It is an absolute honor and privilege to lend my talents for an evening to celebrate JCTC,” said Patrick, who performed at Personal & Universal, a JCTC-event that opened Merseles Studios in 2014. “When I first met Olga I was completely blown away by her vision for Jersey City. Her drive and motivation for developing a space for the arts is genuine and runs deep. The entire team at JCTC is just as passionate and truly have made waves in this city. Which makes the title of this show so perfect!”

One segment of JC Wave Fest will be devoted to Spaghetti Sessions, a Jersey City-based Performing Songwriter Workshop. Since 2011, these live workshops – held in venues ranging from living rooms to bars and gallery spaces – fostered a growing community of musicians, many of whom have gone on to perform throughout the New Jersey/New York area and beyond. The JC Wave Fest Spaghetti Session set features songs developed through this songwriting think tank and performed by an all-star lineup that includes: Junestar MrBlackman, Tiphanie Doucet, Sid Whelan, Frank Ippolito and Sylvana Joyce.

Closing out JC Wave Fest will be After School Orchestra, a rotating band of musicians, singers and spoken-word artists known for their improvisations and uncanny ability to spontaneously create collaborative songs live on stage. After School Orchestra’s open-source jams have attracted a growing following with their memorable performances at various venues throughout Jersey City, including Archetype, an artist-run performance space and the black box theater at Merseles Studios.

Dan Pieraccini, Manager, JCTC – curator of The BOX, an evening of performances that concludes each of JCTC’s thematic series—organized JC Wave Fest. Frank Ippolito, founder of Spaghetti Sessions and Alex Pergament, founder of After School Orchestra—also are Musical Curators for JC Wave Fest.