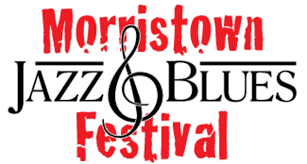 WHEN: Saturday, August 18, from noon until 10:00 p.m.
WHERE: on the Green  in Morristown, New Jersey
ADMISSION: free
The annual free concert is made possible by the generous support of many sponsors who are well-known in the region.
Many local restaurants will be offering specials for festival attendees. Bring your lawn chairs and blankets. For more information, visit www.morristownjazzandblues.org

This year’s festival begins at noon with Rhythm in Blue, the dynamic new jazz ensemble from the United States Air Force. Comprised of 14 talented musicians, the jazz band draws on a classic well-known big band repertoire with an unparalleled level of excitement and versatility.

Jazz fans know that the military jazz bands have a rich history of spawning superb musicians. During World War II, many top jazzmen joined the service bands, the most well-known being Glenn Miller and Artie Shaw. But many younger musicians honed their chops playing in the service as well including a young Dave Brubeck, Paul Desmond and a singer who has gone on to have a pretty good career, Tony Bennett.

At two o’clock a New Jersey Jazz Society favorite, trumpeter, singer and songwriter Bria Skonberg returns to the Green for the first time in three years, taking over the slot held for the past several years by Bucky Pizzarelli. Unfortunately, the hot sun of August has become too much for the legendary nonagenarian so the mantle has passed to the young musician who continues to win critical acclaim and more awards.

Since her Festival debut in 2015, Bria has had two new releases, won the prestigious JUNO Award, received the Swing! Award from Jazz at Lincoln Center, took home a Hot House Jazz Magazine Award last fall, and most recently won Vocal Jazz Album of the Year. Her band includes Evan Arntzen on reeds, Mathis Picard on piano, Devon Starks on bass, and Darrian Douglas on drums.

Following Bria will be New Jersey’s own LaBamba and the Hubcaps. Led by long-time Conan O’Brien band member Richie “LaBamba” Rosenberg, this explosive ensemble has been a fixture on the Asbury Park music scene for many years and was the stage band for the first five induction ceremonies of the New Jersey Hall of Fame. Equally at home with swinging jazz, and blues and funk, the Hubcaps provide a perfect transition from hot swinging jazz in the afternoon to steamy blues at night.

Trombonist Richie Rosenberg got his start with Southside Johnny and the Asbury Jukes, but quickly became one of the most sought-after horn men around, leading Bruce Springsteen’s Miami Horns at the Super Bowl, and joining drummer Max Weinberg and the Conan O’Brien Band more than two decades ago.

At six o’clock, the music turns to the blues with the European-based Bernard Allison Group. Born in Chicago in 1965, Bernard Allison was first introduced to the blues by his father, the legendary guitarist Luther Allison. Bernard developed his guitar chops with the Koko Taylor Blues Machine as well as the legendary Willie Dixon. A star in Europe, Bernard is beginning to get a lot of notice here in America through appearances at Festivals and radio airplay. Wrapping up the day is blues guitarist Davy Knowles who may just be in his early thirties, but has been turning heads with his mature playing. He has toured with a long list of top blues guitarists and has headlined at festivals such as Lollapalozza, Bonnaroo, and Austin City Limits. He is praised by guitar greats such as Joe Satriani who proclaimed Knowles his “favorite modern bluesman” and Peter Frampton who called him “the gunslinger guitarist of the 21stcentury.”

Festival co-producer Linda Smith of LKS Associates looks forward to the show this year. “It is great to feature some young artists, such as Bria Skonberg and Davy Knowles, along with established stars like LaBamba. We love the variety that this festival can provide.”

Mayor Tim Dougherty, who initiated the festival in 2011, commented, “With swinging jazz in the afternoon and hot blues in the evening, there is great music for everyone. The Morristown Jazz & Blues Festival has become a much anticipated event and we thank our generous sponsors for making this day possible.”