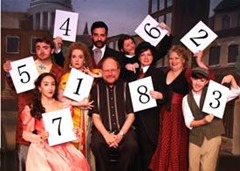 WHEN: September 8th through October 6th, 2018.  Shows will be on Fridays and Saturdays at 8pm and Sundays at 2pm.
WHERE: Little Firehouse Playhouse, 298 Kinderkamack Road in Oradell
TICKETS: $24 for all performances, and can be purchased online at www.bcplayers.org, by calling 201-261-4200 or by visiting the box office at 298 Kinderkamack Road in Oradell during regular box office hours.  Visa, Master Card, and American Express are accepted.

Bergen County Players (BCP), one of America’s longest-running little theater companies, is proud to open its 86th season with the Tony Award-winning musical, The Mystery of Edwin Drood, based on an unfinished novel by Charles Dickens.

Winner of five Tony Awards in 1986, including Best Musical, Best Book and Best Score, The Mystery of Edwin Drood is a musical comedy about a theatre company attempting to stage a musical comedy of the story Charles Dickens was writing when he died. Because the story was never finished, the mystery of who killed Edwin Drood is left to the audience to solve. Depending on the audience’s votes, the last half-hour of the show changes at every performance. There are literally hundreds of possible endings. 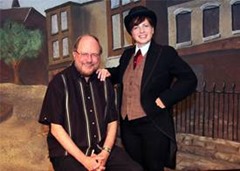 Rupert Holmes (left, with Nancy Feldman), a former Bergen County resident and an ardent supporter of the Bergen County Players, is perhaps best known as author-composer of the Tony award-winning Broadway musical The Mystery of Edwin Drood and the Edgar award-winning Broadway comedy-thriller Accomplice.  He was the first person in theatrical history to be the sole winner of Tony Awards for Best Book, Best Music and Best Lyrics for Drood, which also won the Tony and Drama Desk Award for Best Broadway Musical. In a unique collaboration, Holmes wrote the original comedy thriller Thumbs! expressly for BCP, which had its world premiere at the Little Firehouse Theatre in 2001.

A Life Member, Past-President, and Board of Governor, director Steven Bell of Hackensack has been active with the Players for over thirty years. He has directed numerous BCP productions, including The Musical Comedy Murders of 1940, The Drowsy Chaperone, Ruthless! The Musical, Urinetown, Modern Orthodox, Curtains, and The King & I, to name a few. Steven teaches vocal music at Teaneck High School, and is the Artistic Director of the Teaneck Community Chorus.

The talented cast of The Mystery of Edwin Drood includes Larry Brustofski as The Chairman (of Oakland), Jessica Gundlach as The Stage Manager (of Woodland Park), Eric Schrager as John Jasper (of Paramus), Nancy Feldman as Edwin Drood (of New City, NY), Taylor Rose Rizzotti as Rosa Bud (of West Nyack, NY), Elaine Thoman as Helena Landless (of Ridgewood), Steve Munoz as Neville Landless (of Caldwell), Bryan John Morris as Rev. Crisparkle (of New Milford), Janica Carpenter as Princess Puffer (of Old Tappan), Jim Kelly as Durdles (of Park Ridge), Louie X. Aiello as Cricker, Jr./ Deputy (of Hillsdale), Debbie Zika as Florence Gill (of Hillsdale), Dan Loverro as Horace (of Parsippany), Bill Kaufman as Bazzard (of Paterson).  The cast is rounded out with ensemble performances by Ariel Sanchez of Bergenfield, Rafaelle Danta of Newark, Elisabeth Erdmann of Nutley, Amanda Jean of Teaneck, Alexis O’Neil of Astoria, NY and Joanna Sigurdsson of Bergenfield.