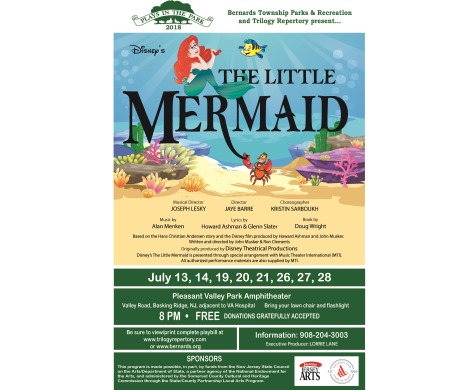 Bring lawn chairs or blankets for seating and a flashlight for finding your way after dark! For information, call 908-204-3003.

The Little Mermaid is directed by Jaye Barre of Basking Ridge, with musical direction by Joe Lesky of Somerset and choreography by Kristin Sarboukh of Bound Brook.  The musical is based upon Disney’s 1989 animated film of the same name and the classic story by Hans Christian Andersen about a mermaid who dreams of the world above the sea. The book is by Doug Wright, with music by Alan Menken and lyrics by Howard Ashman, with additional lyrics by Glenn Slater. The underwater setting and story about aquatic characters will require unusual technical designs and special effects. 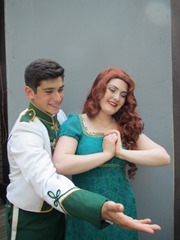 Ariel (Claire Dempsey of Morristown), King Triton’s (Adam Barr of Basking Ridge) youngest daughter, wishes to pursue the human Prince Eric (Nicholas Re of Bernardsville) in the world above the sea.  She bargains with the evil sea witch Ursula (Angela Rose Masi of Basking Ridge) to trade her tail for legs, but the bargain is not what it seems.  Ariel seeks the help of her friends Flounder the Fish (Max Rodriquez of Basking Ridge), Scuttle the Seagull (Alan Scott of Montclair), and Sebastian the Crab (Joseph Schmidt of Bedminster) to restore order under the sea. Other main roles include Grimsby (Hank Barre of Basking Ridge) and Chef Louis (Frank Skokan of Bedminster). (left, Claire Dempsey of Morristown and Nicholas Re of Bernardsville)

The musical opened on Broadway at the Lunt-Funtanne Theater on January 10, 2008, running for 685 performances and receiving two Tony award nominations. Theatergoers will recognize the songs “Part of Your World,” originally sung by Sierra Boggess in her Broadway debut, as well as “Under the Sea.”

The partnership of Trilogy Repertory and Bernards Township has produced over three decades of family entertainment and achieved several awards for both groups for excellence in theater programming.  Most prominent are the awards from ACT (Achievement in Community Theater) and the prestigious “Excellence in Cultural Arts Programming.”  “Disney’s The Little Mermaid” is made possible, in part, by support from New Jersey State Council on the Arts, and is presented through special arrangement with Music Theater International (MTI).