As part of the popular Summer JazzFest, the Bickford Theatre at the Morris Museum presents 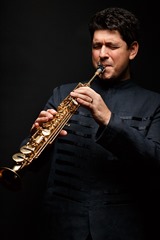 Danny Bacher and his All-Star Band: Accentuate the Positive

WHEN: Thursday, July 12; the food truck picnic begins at 5:30 and the concert at 7:30.
WHERE: Bickford Theatre, 6 Normandy Hgts. Rd., Morristown
TICKETS: $18 for museum members and $20 for general public.
They may be purchased online at morrismuseum.org, by phone at (973) 971-3706, or in person at the Bickford Theatre Box Office.

The show draws on tunes from his soon-to-be-released “Still Happy” CD as well as his exciting salute to Louis Armstrong, Louis Jordan and Louis Prima from his best-selling debut CD. Danny will also premiere several new arrangements including a tribute to the great Johnny Mercer. The All-Stars will feature Harry Allen on tenor sax, Charlie Caranicas on trumpet, Allen Farnham on piano, Bill Moring on bass, and Alvester Garnett on drums.

Danny Bacher is a singer, saxophonist, songwriter and entertainer who hails from New Jersey. The New York Times called him “a prodigiously talented musical preservationist.” His stage presence and delivery are reminiscent of the past giants of the entertainment world. His smooth-as-silk vocals and dynamic sax style combined with a gift for storytelling have made him one of the hottest young jazz artists on the scene today and his performances have taken this NJCU graduate to world-class venues such as Birdland, The Blue Note, Jazz at Lincoln Center, and Carnegie Hall. His first CD, “Swing that Music” paid tribute to the three legends of jazz, Armstrong, Jordan and Prima, and garnered him critical and listener acclaim. He has as much fun on stage as his audience does enjoying the show.

It has been several years since tenor saxophonist Harry Allen has appeared at the Bickford and it has been a long wait. Praised by fellow musicians such as John Pizzarelli (“Harry Allen’s playing is nothing less than perfect”) and critics such as Marti Richards of Jazz Journal (“mind blowing”), Allen performs around the world and has appeared with many jazz greats including Rosemary Clooney, Ray Brown, Hank Jones, Frank Wess, Bucky Pizzarelli, Tony Bennett, and John Pizzarelli.

Trumpet player Charlie Caranicas is well known to jazz fans for both his traditional and mainstream jazz work. He has performed with some of the most prominent bands in jazz from Vince Giordano and the Nighthawks to the Chico O’Farrill Afro Cuban Jazz Orchestra. He has been heard with the Blue Note Jazz Club Band and appears regularly with the very popular Svetlana and the Delancey Five who make their Bickford Theatre debut on July 19. Praised by critics as “wonderfully musical,” “lyrical and emotive,” and a “joy to hear,” Caranicas is a first call musician for hot jazz, mainstream jazz, and Broadway shows.

Pianist, teacher, producer, and composer/arranger Allen Farnham has been active in the New York jazz scene for the past three decades. Constantly in demand, he has performed and/or recorded with a who’s-who of music including Joe Lovano, Arthur Blythe, Charlie Byrd, Met Torme, and Susannah McCorkle. A graduate of Oberlin and Willian Paterson University, he has been awarded grants from the National Endowment for the Arts and the Meet the Composer Foundation. He currently serves as an adjunct professor of jazz at NJCU in Jersey City.

Since arriving in New York in the 1980s, bassist Bill Moring has played around the world, working with many great big bands including Woody Herman’s Thundering Herd and the Count Basie Band. A versatile musician, Bill is first call both for big bands and small groups, most recently touring with the Dave Stryker/Steve Slagle Quartet.

Alvester Garnett worked with Abbey Lincoln and Wynton Marsalis before taking over the drum chair with violinist Regina Carter’s ensemble in 1998. Originally from Richmond, Virginia, Garnett now lives in New Jersey and works with a wide range of artists from Cyrus Chestnut to Dee Dee Bridgewater.

Two mouth-watering food trucks will begin selling at 5:30 so that everyone can enjoy a summer’s evening picnic whether attending the concert or not. Tony’s Traveling Trattoria grew out of a dream that Chef Tony Dobbins had to take his Italian comfort food on the road. It’s food that every Italian mom made when we were growing up. And with Mobile Mardi Gras Food Truck, the bold rich flavors of New Orleans come to New Jersey with Po-Boys, Gumbo, and Seafood Baskets. Come join us for a tailgate before the show and enjoy some scrumptious treats.

The Morris Museum’s Bickford Theatre is located at 6 Normandy Heights Road in Morristown, NJ, and offers free parking and full accessibility. Box office hours for phone sales are Monday through Friday, 10:00 a.m. to 5:00 p.m. Walk-up hours are Tuesday through Friday, 11:00 a.m. to 5:00 p.m. Food trucks will be at all Summer JazzFest concerts starting at 5:30 PM. Generous support for Summer JazzFest is provided by our partners at M&T Bank.