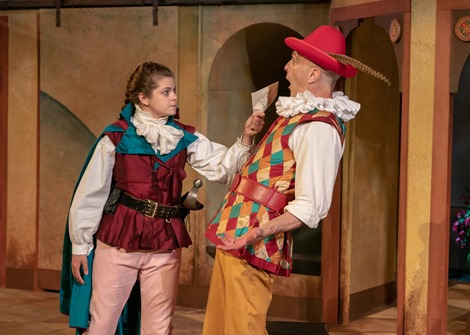 Just seeing the name James Michael Reilly on a cast list makes my heart leap, for I know that audiences are in for a theatrical treat. In the 25 years I have been following the performances of an actor I like to call the Will Kempe of the Shakespeare Theatre of New Jersey (after the Globe Theatre’s renowned comic actor—although Reilly’s versatility extends to straight dramatic roles), he has rarely disappointed me. His very presence in a comedic role raises the level of any production in which he appears.

All of which is to say that I looked forward to the troupe’s current outdoor production of The Servant of Two Masters, now in performance in the Greek Amphitheatre on the campus of the College of St. Elizabeth in Convent Station.

This is not STNJ’s first production of Carlo Goldoni’s 250-year-old comedic masterpiece; it was also performed outdoors in 2010! In my review, I praised its “exuberant mayhem” and “nonstop pandemonium.” Yet the current iteration, while entertaining, feels less energetic and a bit slower—even though it clocks in at the same two hours as the original—attributable perhaps to Doug West’s more languid direction and a dearth of the physical comedy so integral to traditional 16th century Italian drama. 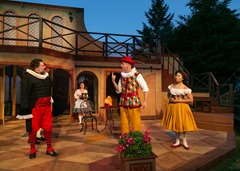 The convoluted plot of The Servant of Two Masters revolves around the complications wrought by Truffaldino, the hapless—and always hungry—servant of the title, when he hatches a scheme to double his salary (and his meals) by serving two different masters at the same time. Not all of the complications are of his own making, however. Mistaken identities, misunderstandings and disguised characters (one of his “masters” is in fact a lady in disguise and the other is her lover, but Truffaldino does not know this) will leave you scratching your head and laughing hilariously. (Above right: Jay Leibowitz, James Michael Reilly, Aurea Tomeski)

Translated and adapted by STNJ Artistic Director Bonnie J. Monte. The script is replete with 21st century idioms: One character bemoans “water under the bridge”; another wishes to “tickle [the] fancy” of a woman he’s attracted to, the nutty events are called “a pretty pickle”; another dubs them a “stew”; still another, a “mess”; and a fourth feels as if he’s in a “melodrama.” None of this slang detracts from Goldoni’s melding the rowdy 16th century commédia dell’arte form with the more refined 18th century comedy of manners; he was, in fact, called the “Molière of Italy.” (Note: If you saw STNJ’s opening production of the latter’s Tartuffe, you’ll see many parallels between the two plays.)

On a set Jonathan Wentz has designed depicting a Venetian piazza paved with colorful harlequin diamonds in front of a lovely loggia featuring sliding doors to reveal extra entrances, implausible and improbable events and gullible characters strain our credulity while fulfilling the expectations of the genre. Paul Canada’s luxurious, colorful costumes transport us through time and space to a Venice lit atmospherically by Rachel Miner Gibney. 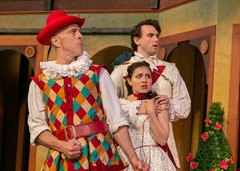 As the eponymous servant Truffaldino, James Michael Reilly doesn’t disappoint. He races frantically between his two masters, talks nonstop to himself and to the audience, and, thinking on his feet, comes up with elaborate explanations for the pickle of his own making. His expressive face and wiry frame make us laugh just looking at him! The scene where he serves food to his two masters in separate rooms is hilarious. Russell Sperberg as Silvio and Miranda Rizzolo as Clarice (above, with Reilly) are the appropriately dimwitted young lovers besotted with love. On the other hand, Jay Leibowitz looks too young and doesn’t sound greedy and status-seeking enough to portray the stock character of Panalone. His comedic chops are wasted in this role. In contrast, as the pompous Dottore Lombardi (the Doctor), Raphael Nash Thompson has a fine time spouting Latin aphorisms that no one understands, much to the audience’s merriment and Pantalone’s ire. 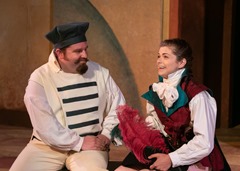 Connor Carew offers lukewarm comedic support as innkeeper/chef Brighella, the only person who recognizes Beatrice Risponi of Turin disguised as her late brother Federico, come to Venice to follow her lover Florindo Aretusi, who has killed her brother in a duel, and to collect the dowry promised him by Pantalone when his marriage to Clarice was arranged. Izzie Steele’s portrayal of Beatrice is the weakest in the production. Steele (Above, with Carew) is too short and her voice too feminine to fool anyone; neither does she swagger like a man might nor affect any male mannerisms to convince others of her supposed gender. She’s sympathetic confessing her love for Florindo to Clarice, but there’s not much comedy in the dramatic irony of her portraying a man. Tug Rice is better as Aretusi, who finds himself “adrift in a sea of confusion” over two sets of letters, a miniature of his likeness and an account book belonging to Beatrice. 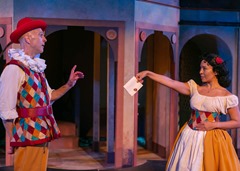 Similar to Shakespearean comedies, commédia dell’arte and Restoration comedy both feature a wise servant who gets the better of his master. Here, that character is the earthy, lusty Smeraldina, Clarice’s maid, played with great gusto by Aurea Tomeski (Left, with Reilly). Hungry for love, she looks at every man with interest, until her eyes alight on Truffaldino. Their courtship is fraught with roadblocks, but rest assured, all ends well after much merriment.

Although written in 1753, The Servant of Two Masters has stood the test of time; in 2012, James Corden had a fine turn in a Broadway version entitled One Man, Two Guvnors. Despite this production’s shortcomings, its highly improbable nonsense will have you holding your sides with laughter. So, bring a picnic, your entire family, a blanket or a chair and be prepared for an evening of more than double entertainment and fun!

Until July 29, The Servant of Two Masters will be performed Tuesdays through Sundays at 8:15 p.m. The Greek Theatre is located on the campus of the College of St. Elizabeth, 2 Convent Road in Morris Plains (behind the Madison Hotel). Kids under 18 offered free tickets. For information and tickets, call the box office at (973) 408-5600 or visit www.ShakespeareNJ.org.