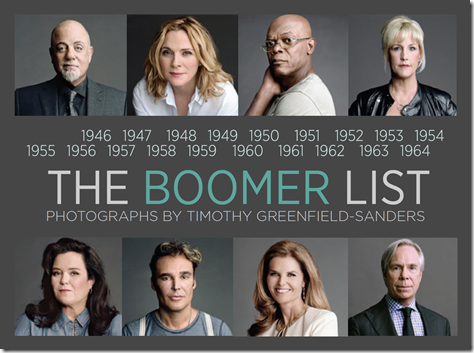 WHEN: Opens July 10, 2018; museum open Tuesday, Wednesday, Thursday, Friday and Saturday, 11:00am to 5:00pm and Sunday, 12:00 to 5:00pm. In addition, the Museum is open evenings from 5:00 to 8:00pm on the second and third Thursday of the month.
WHERE: Morris Museum, 6 Normandy Heights Road (at the corner of Columbia Turnpike) in Morristown
ADMISSION: Admission to the Museum is $10 for adults and $7 for children, students and senior citizens. Admission is always free for Museum members. For more information, call (973) 971-3700, or visit www.morrismuseum.org

Morris Museum will open its newest exhibit, “The Boomer List: Photographs by Timothy Greenfield-Sanders,” featuring 19 large-format portraits of influential baby boomers — one born each year of the baby boom, from 1946 to 1964. Award-winning photographer and filmmaker Timothy Greenfield-Sanders (“The Black List,” “The Latino List” and “The Out List”) chose as his subjects boomers who reflect the depth, diversity and talent of their generation. The exhibit, created by the Newseum in Washington, D.C. in partnership with AARP, will be on display at the Morris Museum through September 10, 2018.

Baby boomers have had a profound impact on the world, shaking up attitudes about sex, race and politics, and leaving their mark on everything from science and technology to art and music. The 19 men and women selected for “The Boomer List” are:

"Someday, the history of the Boomer generation will be written and rewritten many times" said Dr. Cleveland Johnson, Executive Director of the Morris Museum. "Until then, the photography of Timothy Greenfield-Sanders gives us already a revealing look at 19 Boomers who loom large today in that evolving story."

“The Boomer List” also includes an original Newseum-produced film featuring the photographer’s stories about the project, and features a scent station with memorable aromas familiar to the baby boom generation. The station will include whiffs of baby powder, to represent the 76 million-plus babies born between 1946 and 1964; fresh-cut grass, a reminder of the boomers’ move to the suburbs; and incense, evoking the musky smell of rebellion, flower power and love-ins.

“The Boomer List” is made possible by generous support from AARP.

The Newseum is dedicated to increasing public understanding of the importance of a free press and the First Amendment. Headquartered on historic Pennsylvania Avenue in Washington, D.C., the Newseum’s visitors experience the story of news, the role of a free press in major events in history, and how the core freedoms of the First Amendment — religion, speech, press, assembly and petition — apply to their lives. The Freedom Forum Institute is the education and outreach partner of the Newseum, including the First Amendment Center, the Religious Freedom Center and NewseumED, an online learning platform for teachers and students. The Newseum is a 501(c)(3) public charity funded by generous individuals, corporations and foundations, including the Freedom Forum. For more information, visit newseum.org and follow us on Facebook, Twitter and Instagram.

Founded in 1913, the Morris Museum is an award-winning, community-based arts and cultural institution which serves the public through high-caliber exhibitions in the arts, sciences and humanities.  The Museum also offers educational programs, family events, and is home to the Bickford Theatre and its wide range of performing arts offerings. Continuously serving the public since 1913, the Morris Museum has been designated a Major Arts Institution and has received the New Jersey State Council on the Arts’ Citation of Excellence, among other awards. The first museum in New Jersey to be accredited, the Morris Museum was re-accredited in 2013 by the American Alliance of Museums.