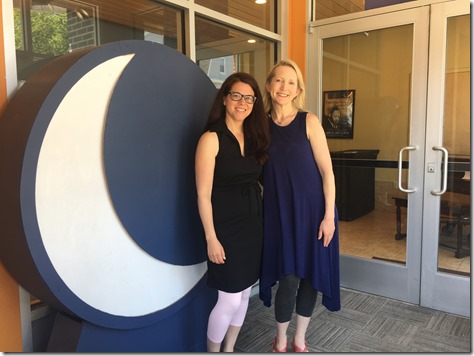 Luna Stage Company launched a new era on July 1, when it welcomed Ari Laura Kreith as Artistic Director and Miriam Gardin as Managing Director. The new team has announced a MainStage season featuring four new plays set in locations ranging from Malawi to Manhattan. They are committed to developing work that inspires empathy, provokes dialogue, catalyzes action, and reflects local voices as well as national and international conversations.

“I want people to walk out of Luna’s plays inspired to connect. I want them to see the world more deeply and to take action about things that matter to them,” said Kreith. “I’m excited to produce theatre that reflects the vibrant community we inhabit—and to stage plays that grapple with the central issues of our time.” Luna’s pre- and post-show conversations initiate the process of dialogue and connection, as does the company’s Context Room, an exhibit space displaying historical, dramaturgical, and other relevant materials for audience members before performances and during intermission. This exchange, jumpstarted at Luna, then continues on into people’s daily lives.

In its 25-year history, Luna Stage has nurtured more than 80 plays, and countless playwrights, actors, and audiences. “Luna has become known for its high-quality, adventurous work and, more recently, for its bold educational opportunities for both children and adults,” Gardin said, “yet we’ve been told that Luna is New Jersey’s best-kept secret. We aim to build on Luna’s first 25 years, deepening our connection with our local community, broadening our connection with theatre-goers beyond our neighborhood, as well as extending our link to the wider theatre industry. We want to spread the message, draw back the curtains, let the secret out, and thereby ensure another 25 years of excellent and transformative theatre work.”

Now a Montclair resident, Kreith comes to Luna from Theatre 167, the company she founded in Jackson Heights, Queens in 2009. She named it for the number of languages spoken in the neighborhood, which has been called the world’s most diverse community. At Theatre 167, Ari conceived and directed The Jackson Heights Trilogy—three full-length plays collectively written by 18 playwrights, performed by 37 actors playing 93 roles in 14 languages. Other world premieres Kreith directed at Theatre 167 include Mourning Sun in Manhattan and Uganda, Pulitzer-finalist Tina Howe’s climate change drama Singing Beach, and Pirira, which received the New York Innovative Theatre Foundation’s Award for Outstanding Premiere of a Play and will inaugurate Luna’s 2018-19 Season this October.
"I’m thrilled to be at Luna, and to build on the tradition of artistic excellence that has been a hallmark of Luna’s first quarter century," Kreith continued. “I’m a strong believer in the importance of local regional theatre. Powerful theatre is wonderful no matter where it happens, but the opportunity to experience dynamic plays that inspire connection and conversation in your own community is especially meaningful. I’m so grateful to be able to share this work with my friends and neighbors.”

Gardin, originally from Detroit, resides in West Orange, where she curated and produced the New Jersey Jewish Film Festival and ReelAbilities: NJ Disabilities Film Festival. She served as Director of Development at The Ensemble Studio Theatre, and worked with Situation Interactive, serving clients such as Disney Theatrical Group, 2econd Stage Theatre, and The Broadway League. Gardin produced The Divine Mr. Average in Washington, DC’s 2006 Capital Fringe Festival and has won international awards as a performer. She got her start in arts management with Performing Arts Chicago, where she helped produce the International Festival of Puppet Theatre in 2000, and she formalized her training at Brooklyn College’s MFA program in Performing Arts Management.

Luna’s founder, Jane Mandel, served as Artistic Director until 2010, when Luna moved from Montclair, New Jersey to its current home in West Orange. Cheryl Katz succeeded Mandel for the following eight seasons. Mandel is eager to welcome Kreith and Gardin to Luna. “One of Ari’s great strengths is community engagement, which will be exciting for the Valley Arts District and surrounding neighborhoods,” Mandel said. “Miriam and Ari are a great team and they have my wholehearted support!”

“Luna is rekindling its role as an engine for community and arts engagement in the Valley Arts District” added Luna Stage Board President Rita Woodard, who has been with Luna since 2012. “Ari's and Miriam’s skills and experience will build theatre that builds community. They will continue Luna's tradition of producing work that inspires powerful conversations. I am beyond delighted about Luna's evolution.”

Kreith and Gardin’s inaugural MainStage season will feature four new plays filled with humor, heart, and imagination. They include J.Stephen Brantley’s Pirira, set simultaneously in Malawi and Manhattan, and exploring the challenges of international aid across cultural divides; Camilo Almonacid’s The Assignment, in which a college student and his professor form a bond, only to discover that they were once on opposite sides of a similar violent act; the world premiere of Christina Gorman’s Roan @ the Gates, a fictional investigation into cyber-security; and Gabriel Jason Dean’s Heartland, a multilingual celebration of literature, loss, language, and love set in both Maidan Shar and Omaha. Season Passes are on sale now at http://www.lunastage.org/season-passes.php or by calling 973-395-5551.
“Luna’s home in the heart of the Valley Arts District of Orange and West Orange is such an exciting place to be!” Kreith said. “The best theatres exist at a sort of community crossroads. Plays invite us to come together, carrying our own stories and experiences, and sit and share with one another. And then, if the play has done its work, we continue on our journeys, changed.”

About Luna Stage
Luna Stage develops and produces thought-provoking theatre that gives voice to emerging American playwrights and new life to contemporary and classic plays that speak to our times. Committed to creating vibrant, inclusive, and catalytic experiences onstage, in our classes, and in the communities we serve, Luna collaborates with artists from diverse disciplines, backgrounds, and aesthetics to explore the myriad perspectives of our society.
Luna’s classes for children and adults, and its developmental programs for early career artists, inspire community members to nurture their own creativity and vision.

Luna Stage has contributed to the development of over 80 new works for the stage, earning a reputation for artistic excellence. Some of those plays have gone on to productions in New York City and beyond. Luna’s unique approach to producing, as well as the work itself, fosters an environment of inclusivity, understanding, and infinite possibility.