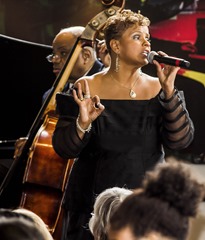 WHEN: Thursday, July 26, at 7:30 p.m. The food truck picnic begins at 5:30 p.m. and the concert at 7:30 p.m.
WHERE: Morris Museum’s Bickford Theatre located at 6 Normandy Heights Road in Morristown, NJ, offers free parking and full accessibility.
TICKETS: $20 for museum members and $25 for general public.
They may be purchased online at morrismuseum.org, by phone at (973) 971-3706, or in person at the Bickford Theatre Box Office. The  Box office hours for phone sales are Monday through Friday, 10:00 a.m. to 5:00 p.m. Walk-up hours are Tuesday through Friday, 11:00 a.m. to 5:00 p.m.
Food trucks will be at all Summer JazzFest concerts starting at 5:30 PM. Generous support for Summer JazzFest is provided by our partners at M&T Bank.

Antoinette Montague is an award-winning jazz and blues singer who performs all over the world, but has never forgotten her New Jersey roots. Joining Ms. Montague will be Ken Peplowski on sax and clarinet, “King” Solomon Hicks on guitar, Brandon McCune on piano, Melissa Slocum on bass, Bobby Sanabria on drums, and tap dancer AC Lincoln.

Raised in Newark and surrounded by music, Antoinette Montague brings a passion and energy to every performance drawing on influences such as Etta James and Shirley Horn as well as her mentors Carrie Smith and Etta Jones. With her broad repertoire of swing, blues, bebop, and vintage soul, she takes the audience on a journey that embraces the power of jazz history and touches the human spirit to the core.

Ms. Montague has performed around the world at famous places such as Jazz at Lincoln Center and NJPAC, with the Belgarad Philharmonic Orchestra in Russia and the Ashod Orchestra in Israel, at the famed Eleuthera All That Jazz Festival in the Bahamas or on a U.S. State Department tour. No matter where she is, she always brings down the house.

Besides the many accolades she has received for her vocal accomplishments, Ms. Montague has been widely praised for her community service, winning awards that include “Woman of the Year,” Delta Sigma Theda’s “Standing On Her Shoulders” award, and the Women’s Academy of Excellence Philanthropy Award. She is the CEO of Jazz Women to the Rescue which helps provide musical instruments to young people who have limited arts offerings in their schools.

From the Newport Jazz Festival to the Hollywood Bowl, Ken Peplowski has become one of the most popular woodwind players in jazz not only for his joyful playing but also for his great sense of humor. He performs all over the world, in concerts, for workshops, on jazz cruises and on film soundtracks. He has recorded more than 50 CDs as a soloist and has appeared on close to 400 as a sideman, performing or recording with many greats including Benny Goodman, Mel Torme, Charlie Byrd, Peggy Lee, Madonna, Woody Allen, and the Cincinnati Pops. He has received the prestigious Sarasota Jazz Festival’s “Satchmo” Award, the Hot House Jazz Magazine’s Fan’s Decision Award for Favorite Clarinet, and most recently was honored by “Highlights in Jazz” in New York City.

Only 22, guitarist “King” Solomon Hicks effortlessly merges jazz and blues, opening for blues superstars like Joe Bonamassa as well as performing with jazz icons such as Tony Bennett and Lee Ritenhour. His extraordinary talent has received coverage in a wide range of publications including The Washington Post, The New York Times, the Daily News, and on PBS. And he has headlined at Shanghai Jazz in Madison.

Pianist Brandon McCune earned his music degree from Rutgers University a little more than ten years ago, but already has made an impact as a professional. He has worked as a band leader, music director or sideman for many top artists including Betty Carter, Wynton Marsalis, Abbey Lincoln, Buster Williams, Terence Blanchard, and Nneena Freelon to name a few. Equally at home in classical and gospel music, he founded a nonprofit umbrella for Gospel Music entertainment and has written music for dance ensembles.

First-call bassist Melissa Slocum is equally at home on Broadway, in classical halls and in jazz clubs. She has been the bassist from “The Phantom of the Opera” since 1999 and performs regularly with the New Jersey Symphony, the New York Pops, and several other orchestras in the area. But she is highly regarded in the jazz world as well, having earned her Masters of Music in Jazz Studies from the Manhattan School of Music. She has worked with many of the greatest legends of jazz including Art Blakey, Lionel Hampton, Cab Calloway, Clark Terry, Wynton Marsalis, Woody Shaw and Hank Jones.

Drummer Bobby Sanabria is a 7-time Grammy-nominee who has been named Percussionist of the Year by both the Jazz Journalists Association and DRUM! Magazine. Best known as the drummer and percussionist for every major figure in the history of Latin jazz, he has just released his monumental Latin jazz reworking of West Side Story, entitled “West Side Story Reimagined” with part of the proceeds going to the Jazz Foundation of America’s Puerto Rico Relief Fund.

Special guest AC Lincoln is a multi-dimensional tap dance master who is known for his hypnotic rhythms and electrifying virtuosity. He discovered his tap dancing ability at a young age and has shared the stage with legendary tap artists such as Peg Leg Bates, Jimmy Slide, Savion Glover, Buster Brown and Henry Latang. He has appeared at festivals and concert halls around the world and currently is a regular performer with the popular hot swing group, the Hot Sardines.

Two stellar food trucks will begin selling at 5:30 so that everyone can enjoy a summer’s evening picnic whether attending the concert or not. Aroyo-D, The Thai Elephant serves up authentic Thai food under the watchful eye of Chef Pupay who studied at the Culinary Institute of Bangkok. Joining The Thai Elephant is Ice Cream Thai’m, specializing in Thai rolled ice cream. It’s a perfect way to spend a summer evening.