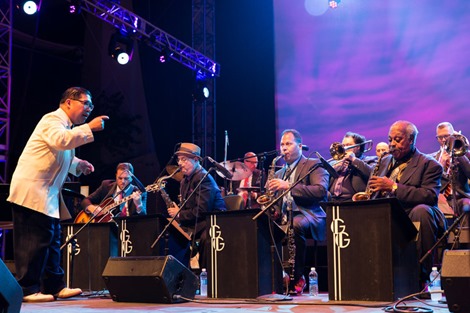 WHEN: Saturday, July 21, at 8pm
WHERE: Lackland Performing Arts Center at 715 Grand Ave. Hackettstown
TICKETS: $25.00 for all seats in advance. As with all concerts, jazz and special events ticket prices increase $5.00 day of the performance.
For more information or to purchase tickets visit centenarystageco.org or call the Centenary Stage Company box office at (908) 979 – 0900. The box office is located in the Lackland Performing Arts Center. The box office is open Monday through Friday from 1 – 5pm and two hours prior to every event. Centenary Stage Company can also be found across social media platforms; Facebook, Instagram and Twitter. Like and follow to receive the latest in Centenary Stage Company news and special offers.

The George Gee Swing Orchestra packs a lot of swing into compact songs and tight, well-organized sets. The orchestra was the first big band to play on MTV. The band was featured in an NBC-TV movie and has been spotlighted on “Entertainment Tonight,” “Live with Regis & Kathie Lee,” “Cake Boss,” “Live from Lincoln Center,” and in appearances on CNN and MSNBC. The band also provided specially scored music and made an “animated” appearance on an episode of the Fantastic Four cartoon for Marvel Comics.

The George Gee Swing Orchestra has dazzled audiences from Boston to Beverly Hills and from Zurich to Tokyo. Other exciting recent experiences include annual headliner spots at Lincoln Center’s prestigious Midsummer Night Swing festival, a two-week engagement of the full-scale supper club show called “Sleigh Bells Swing!” at the Edison Ballroom in Manhattan, and a memorable corporate show at Disney World with the legendary comedian (and noted jazz aficionado) Bill Cosby. The band has a mammoth tour resume – including top swing clubs, swing dance societies, and “lindy exchanges” across the US, numerous tours of top concert halls, and powerful “Battles of the Bands” in New York, Los Angeles, Washington, DC, Cleveland, Philadelphia and Quebec.