See “The Tempest” in various venues around Northern NJ this month 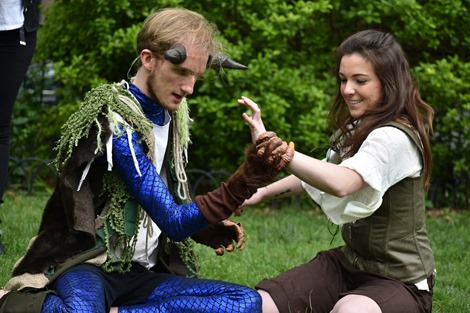 The Hudson Shakespeare Company (HSC) returns for its 27th season of touring Shakespeare in the parks with one of the Bard’s last and most magical plays, The Tempest. [Above: Caliban (Victor Steel) and Miranda (Giulianna Carr)] 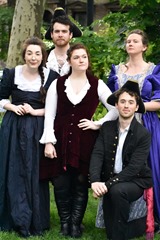 The play follows a group of Italian royals returning from a distant wedding and are shipwrecked during a violent storm on a deserted island, however, nothing is as it seems. The island hides mystical creatures and overseeing them is old enemy of the royals, the self-taught wizard and former Duke of Milan, Prospero. However, Hudson Shakespeare now flips the script, changing several characters to women. [Royals from left to right Gonzala (Emily Ann Banks), Antonio (Jeffrey Robb), Sebastine (Julia Geromin), Ferdinand (Patrick McAndrew), and Alonsa (Lily Warpinski)]

In this new version set in the age of piracy, twelve years earlier Prospera (Kitty Mortland), the Duchess of Milan pursued the mystic arts in her vast library and turned over the rule of the city over to her brother Antonio (Jeffrey Robb). Antonio becomes well versed in running the state and thinks he can do a better job. He allies with Alonsa, Queen of Naples (Lily Warpinksi) and her sister Sebastine (Julia Geromin) and they overthrow Prospera.

She is then exiled with her young daughter Miranda (Giulianna Carr). However, some of Prospera’s key books and other supplies Gonzala (Emily Ann Banks). Prospera and Miranda eventually drift to an island inhabited by the witch Sycorax and her half human, half sea creature son Caliban (Victor Steel). Sycorax attempts to capture Prospera but in the ensuing fight she is killed and Prospera becomes ruler over the island and all its mystical creatures including Sycorax’s key spirit (Phoebe Cramer).

Returning to the present time and Prospera conjures up a massive storm to shipwreck the passing royal ship containing Antonio, Alonsa, Sebastine, and Alonsa’s son Ferdidnand (Patrick McAndrew). What begins as a plot of revenge and political intrigue takes some unexpected and magical turns.

“As a company, we’ve produced The Tempest, twice before, once in 2000 and the other in 2010 both with powerhouse actors as Prospero”, said director Jon Ciccarelli, “and we were thinking what different spin could we do with a new production and we settled on the challenge of seeing Prospero’s story from a woman’s perspective.”

“Prospero is very much a father figure not only of his biological daughter, Miranda, but also to all of the island’s inhabitants. The character has favorites and some not and this informs his relationships with them. He has some affection for Ariel but not for Caliban. Seeing it through a mother’s perspective instead was interesting in how it brought a different energy to those scenes while staying familiar to Shakespeare’s story.”, said Ciccarelli

While having a female Prospero is not new, most famously done with Helen Mirren in Julie Taymor’s film version, HSC decided to take the concept further. “We decided to have King Alonso and his brother be women as well. In the play, the characters of Alonso and Prospero are mirrors of each other so we wanted to explore that motherly relationship as well”, Ciccarelli said. “Historically, female rulers were around in Europe at this time due to being widowed or there were no men to succeed so they had to take up that mantle. “The Tempest” is also a high seas adventure with mystical elements so we thought that “Pirates of the Caribbean” look and feel lent itself very well to the production’s setting.”

HSC’s production also incorporates several flashback sequences set to music and fights that showcase several character’s backstories. Admission is free. It is recommended to bring a lawn chair or blanket. The company will also return in July with a Jane Austen set All’s Well That Ends Well and is October with a Halloween themed The Spanish Tragedy set in a Gothic Spanish motive.

For more information on show dates and venues visit www.hudsonshakespeare.com.