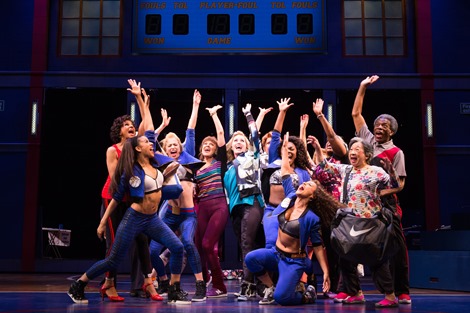 The musical now receiving its East Coast première at the Paper Mill Playhouse is called Half Time, but it might as well be titled A Chorus Line for Seniors.

Based on a real incident from 2006, when the New York Nets held auditions for the first-ever NBA senior hip-hop squad and on a 2008 documentary—directed, interestingly, by the current iteration’s producer Dori Berinstein—Half Time follows the Chorus Line formula: Each dancer in the nine-member senior squad gets a “star turn” to give a bit of back story. And, there are physical reminiscences of the source musical too in the mirrors that revolve so we can see multiple dancers reflected behind the real ones and the music Joanne (portrayed by Donna McKechnie) dances that mimics the melody and rhythms she danced to as Cassie in the original.

Yet, Half Time—subtitled The New Musical About Not Acting Your Age—is a diverting, entertaining, well-produced piece of musical theater. True, Matthew Sklar’ melodies and Nell Benjamin’s lyrics are largely forgettable and predictable; the dancing is appropriately clumsy as befits a group of graying amateurs. 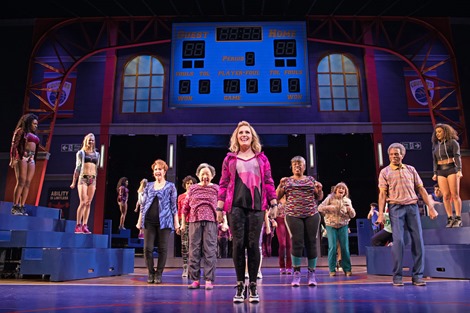 But on a serious note, the book by Bob Martin and Chad Beguelin links the marginalized ghetto youth who “invented” hip-hop to the senior citizens equally disdained by the young, as characterized by officious Nets’ Director of Marketing Alison Prager (Tracy Jai Edwards) and squad dancer Kendra (Nkeki Obi-Melekwe) who bristles at having to drive her grandmother Bea (Lillias White) to and from rehearsals while fielding probing questions about her romantic relationship with the married team center (Garrett Turner). Tara (Haven Burton, above center), the squad’s coach, who has “aged out” of performing at the advanced age of 28 feels equally dismissed. Her own sad experience leads her to accept these eight women and one man as individuals and fight for them against a management that wants to turn them into a comedy act.

The plot’s most pressing conflict centers on whether this “geriatric flash mob” will learn the routine in three weeks so they can perform at a game’s half time, a feat made even more difficult by their infirmities (one is legally blind, another rhythmically challenged), their individual personal problems and their inability to embrace hip-hop, “a very demanding form of dance.” Director/Choreographer Jerry Mitchell keeps the action moving steadily along, so by the end of the evening, these characters feel like old friends. That he’s assembled a terrific troupe of talented veteran actors, most of them recognizable to an older audience, adds to the feeling of intimacy. 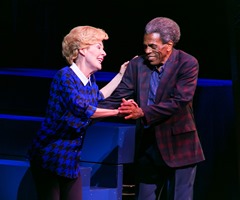 Mitchell has cast some heavy hitters in the key roles. Ron, the sole male, is portrayed as the “King of Swing” by a smooth André de Shields (left, with Georgia Engel). His dream sequence dance with his late wife Judith (a lithe Sydni Beadoin) is poignant, his budding romance with kindergarten teacher Dorothy delightful. Played by Georgia Engle, Dorothy is the character around which the plot revolves. Prim and proper, unafraid to take on a difficult child, she’s the teacher we’d all like to have had in kindergarten. Yet her alter-ego Dottie is wilder, willing to let down her guard and tackle an equally as difficult dance with gusto. Her acceptance of and proficiency at performing hip-hop inspires her fellow dancers and ads a bit of humor too. 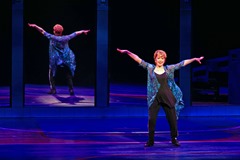 And the aforementioned Donna McKechnie (right) can still strike a dancer’s pose even if she’s not as limber as she was in A Chorus Line. As stuck-up Joanne, she’s not very likeable (she claims she’s “Too Good for This”), yet she redeems herself after making a major booboo. And, she’s very energetic exhorting the squad to “Follow [Her] to the Party” at Club Hell; heck, I even wanted to get up and dance! 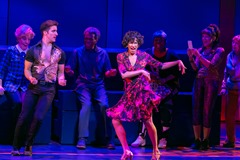 Other standouts include Lillias White as busy-body grandmother Bea, who raves about her “Princess” in three (!) numbers; her gospel-like warble is memorable. A slim, slithery Nancy Ticotin (left) as hot Latina Camilla sings and dances a sexy salsa with Alexander Aquilar (“¿Cómo No?”) and brings down the house. 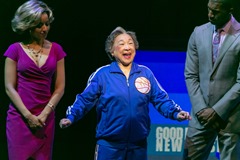 But it’s dark horse Lori Tan Chinn who, as Mae, is a laugh riot running around to find her place in line and a face that endearingly breaks into a thousand wrinkles when she smiles broadly and giggles. In “The Waters Rise,” she really lays bare a common problem seniors face: caring for an ill spouse—in her case, a husband with dementia. You could hear a pin drop in the auditorium as she sang her poignant refrain. It touched a nerve; perhaps many have experienced or known someone in the same situation.

In minor roles, Madeleine Doherty is spunky as tap dancing Estelle; Lenora Nemetz’s Fran is a committed Mary Kay saleswoman; and Kay Walbye has some funny bits as legally blind Muriel. Mary Claire King is adorable as 21-year-old dancer Jenny, and Nkeki Obi-Melekwe’s Kendra hilariously rolls her eyes at her grandmother’s nosiness. Through it all, Haven Burton’s Tara marshals her charges through the routine, her attitude morphing from exasperation and outright hostility to warm acceptance and strong support. She even risks her own job to help them maintain their dignity. 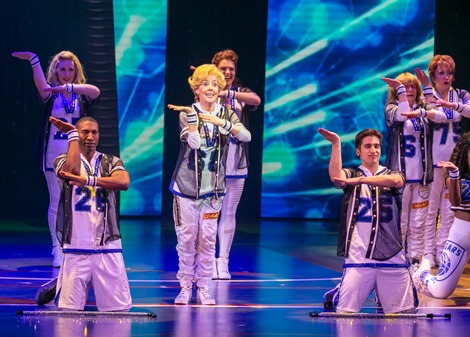 Had it not been drawn from real life, the plot of Half Time could be described as predictable and sappy. Whether the seniors will learn the routine and not embarrass themselves provides the plot’s tension. But this being musical theater, rest assured: They distinguish themselves—in spades—for a happy ending. And best of all, we all feel a lot better and prouder for it, regardless of our age!

Half Time will be performed at the Paper Mill Playhouse, 22 Brookside Drive, Millburn, through July 1. For information, performance dates/times call the box office at 973.376.4343 or visit www.PaperMill.org online.