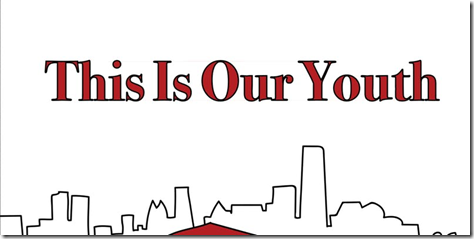 WHEN: Friday, June 22, and Saturday, June 23, at 8PM.
WHERE: Chatham Playhouse 23 North Passaic Ave. Chatham
TICKETS: $5, and can be purchased here: www.tics.eventbrite.com

Richie Carchia, who most recently starred as Danny Zuko in Chatham Community Players' Grease, presents Kenneth Lonergan's This Is Our Youth. Kenneth Lonergan is one of the most renowned American Playwrights, who recently had his play Lobby Hero produced on Broadway.

This production funny yet touching portrayal of the transition from being an adult to adulthood takes place in Manhattan in the year 1984. The story exposes three characters on brim of their youth. Mature audiences only.

In this cast is a group of fierce and talented artists. Starring as Warren is Richie Carchia, a graduate of Morristown-Beard school, who will attend Kenyon College in the Fall where he will continue acting. Starring as Dennis is Gio Guanill, who just finished his first year at the American Academy of the Dramatic Arts in Manhattan. Caitlin Ladda, a rising senior at Montclair-Kimberly Academy, is portraying the role of Jessica.

*Recommended for a mature audience

In 1982, on Manhattan's Upper West Side, the wealthy, articulate pot-smoking teenagers who were small children in the '60s have emerged as young adults in a country that has just resoundingly rejected everything they were brought up to believe in. The very last wave of New York City's '60s-style Liberalism has come of age—and there's nowhere left to go. In meticulous, hilarious, and agonizing detail,

THIS IS OUR YOUTH follows forty-eight hours of three very lost young souls in the big city at the dawn of the Reagan Era: Warren Straub, a dejected nineteen-year-old who steals fifteen thousand dollars from his abusive lingerie-tycoon father; Dennis Ziegler, the charismatic domineering drug-dealing friend who helps him put the money to good use; and Jessica Goldman, the anxiously insightful young woman Warren yearns for.

Funny, painful, and compassionate, THIS IS OUR YOUTH is a living snapshot of the moment between adolescence and adulthood when many young people first go out into the world on their own, armed only with the ideas and techniques they developed as teenagers—ideas and techniques far more sophisticated than their parents ever realize, and far less effectual than they themselves can possibly imagine.