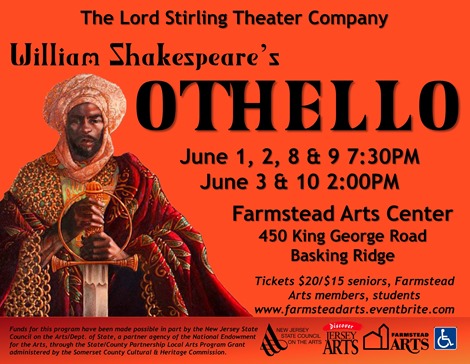 The Tragedy of Othello, the Moor of Venice

WHEN: opens Friday, June 1, at 7:30PM, with additional performances on June 2 at 7:30PM, June 3 at 2:00PM, June 8 and 9 at 7:30PM, and June 10 at 2:00PM.
WHERE: English Barn Theater at the Farmstead Arts Center, 450 King George Road, Basking Ridge
TICKETS: $20 general admission, or $15 for seniors (65 and over), Farmstead Arts members, and students.
Tickets may be purchased online at http://farmsteadarts.eventbrite.com or at the door (cash only).
The English Barn Theater is wheelchair accessible. Anyone anticipating the need for additional accessibility services please send an e-mail in advance to farmsteadartscenter@gmail.com.

Othello, the Moor, is a general in the Venetian army. He secretly marries Desdemona, the daughter of a prominent Venetian senator. Othello’s ensign, Iago, harbors jealousy and resentment towards the Moor for having promoted another soldier, Cassio, ahead of him. He also suspects that Othello has had an affair with his wife, Emilia. To get revenge, Iago devises a plan to plant suspicions in Othello’s mind that Desdemona has been unfaithful to him with Cassio. Iago’s lies and insinuations drive Othello mad with jealousy and incite him into a murderous rage, with tragic results.

Written around 1604, Othello is one of Shakespeare's most famous plays, and its themes of jealousy, manipulation, and division remain relevant to the present day.

The Lord Stirling Theater Company’s production of Othello is directed by William Ward of Basking Ridge. The cast, in order of appearance, includes: Lee Grabelsky of Cranbury as Roderigo, Matthew Gochman of Jersey City as Iago, Christopher C. Gibbs of Pittstown as Brabantio/Lodovico, Ron Richardson of Maplewood as Othello, Maxwell C. Blackriver of Mendham as Michael Cassio, Bob Scarpone of Flanders as the Duke of Venice/Gratiano, Garry Tamburro of Springfield and Allan Gershenson of Linden as Senators of the Republic, Liz Carlin of Lakewood as Desdemona, Peter Curley of Maplewood as Montano, Danielle Levitt of Westfield as Emilia, Robert H. Goodwin of Highland Park as the Herald, Changkuo Hsieh of Parsippany as the Clown, and Alexa Ortiz of Bridgewater as Bianca.

Othello opens The Lord Stirling Theater Company’s fifth season at the Farmstead Arts Center, following their 2017 productions of “Arsenic and Old Lace” and “Of Mice and Men.“ Past productions also include “And Then There Were None” and “The Dresser” in 2016, “The Tempest” and “Frankenstein’s Fate” in 2015, and “The Legend of Sleepy Hollow” in 2014. A dynamic community of creative artists based in Basking Ridge, the group is committed to presenting innovative theater for diverse audiences, through readings and full productions of classical theater and new works, as well as exploring the American experience through compelling productions that illuminate and celebrate our history, culture and literature. The theater group fosters the next generation of theater artists and audiences by providing unique hands-on educational programming and training in all aspects of theater production. For more information, visit www.lordstirlingtheater.com or our Facebook page.