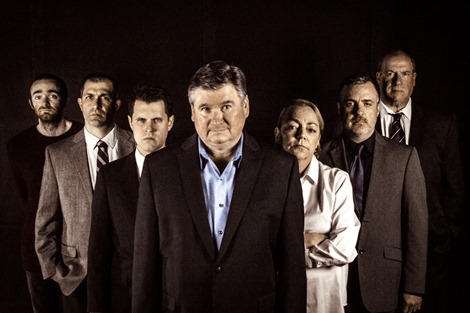 WHEN:  May 25 to June 3. Fridays, May 25 and June 1 at 8 p.m.; Saturdays, May 26 and June 2 at 8 p.m.; and Sundays, May 27 and June 3 at 2 p.m.
WHERE: Mercer County Community College’s (MCCC’s) Kelsey Theatre located on the college’s West Windsor Campus, 1200 Old Trenton Road.
TICKETS: $18 for adults, $16 for seniors, and $14 for students and children.
Tickets may be purchased online at www.kelseytheatre.net or by calling the Kelsey Box Office at 609-570-3333.  Kelsey Theatre is wheelchair accessible, with free parking next to the theater. For a complete listing of adult and children's events, visit the Kelsey website or call the box office for a brochure.

In the cutthroat world of Chicago real estate, a band of dodgy salesmen are prepared to use all means necessary, legal or otherwise, to sell undesirable properties to unwitting prospective buyers. Over the course of two intense days, they employ flattery, lies, bribes, threats, intimidation and even burglary in an attempt to get the job done. The plot is based on work experiences from Mamet's past – before he became a Pulitzer Prize-winning playwright.

The show had its world premiere at the National Theatre in London in 1983. It opened on Broadway in 1984, where it ran for 378 performances and was nominated for four Tony awards. A 1992 film version included actors Jack Lemmon, Al Pacino and Ed Harris.