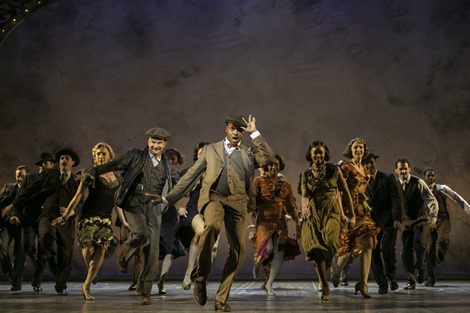 Art of the Deal, move over; make way for Art of the Con—better known as The Sting—the musical blueprint for a successful confidence game now making its World Premiere at the Paper Mill Playhouse in Millburn.

Led by Harry Connick, Jr., this version of the beloved film (starring icons Paul Newman and Robert Redford and featuring the music of Scott Joplin) follows the basic, if convoluted, plot, but pads it with extended and often superfluous dance numbers, overwritten scenes and star turns for Connick so that its running time of two and a half hours exceeds that of the original. Broadway audiences, accustomed to 90-minute to 2-hour productions will have a hard time sitting through this one, no matter how riveting the plot. 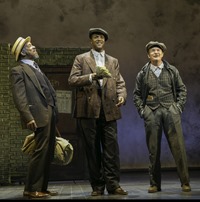 This is not to say, however, that The Sting in its current iteration lacks charm, wit or artistry. Bob Martin has eschewed replicating David Ward’s splendid screenplay, opting instead for a mixture of raucousness and quiet to tell the tale of an unlikely friendship that develops between Johnny Hooker (Left center, with Kevyn Morrow and Peter Benson), a young black grifter, and his white partner, the piano-playing Henry Gondorff, as they perpetrate a “long con” to get revenge on the dastardly Doyle Lonnegan for his role in the defenestration of Hooker’s mentor Luther back in Joliet, Illinois.

I am pleased to report that Martin and Director John Rando haven’t abandoned the script’s antecedents altogether; they have retained the vaudeville cards (carried by fetching showgirls) denoting each step of the sting, and composer Mark Hollmann manages to insert snippets of Scott Joplin’s recognizable Ragtime melodies used in the film score. In fact, the opening scene, featuring a lone trombonist playing the film theme’s melancholy notes, reminiscent of Fiddler on the Roof, provides a powerful link to the source material.

Martin’s script elicits our sympathy for men who are essentially criminals by portraying the long con as a theatrical production, complete with costumes and roles, for an “audience of one”—in this case Lonnegan. And Hooker and Gondorff’s anticipation of the “thrill of the con” is so infectious that we root for them to triumph over someone even more evil than they. 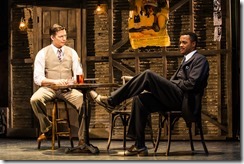 The talented actors portraying these low-lifes make the con fun to watch. Although he’s billed as the star of the show, Harry Connick Jr. (Gondorff) is a better musician than he is an actor; his acting style involves loud declamation, mostly, so his character comes across as more one-dimensional than real. He does better in the comedic bits, especially the poker game in the railway car that is the high point of the first act, where his broad approach turns what should be a serious crime into buffoonery. He can play a mean piano, though, a skill highlighted by “The Ragtime Rip,” chronicling how his music distracted brothel patrons so his partner could pick their pockets, and the opening number of Act II, “This Ain’t No Song and Dance.” Unfortunately, this dazzling display does nothing to advance the plot; it merely holds up the action and could be shortened or scrapped. (Above: Harry Connick, Jr., and J. Harrison Ghee) 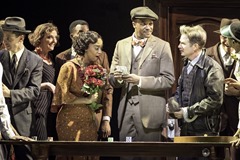 But J. Harrison Ghee (Johnny Hooker) literally steals the show from under the more famous Connick’s nose. In his first leading role (his bio lists stints in various musical theater ensembles), Ghee gives his character depth, conveying the challenges he faces as a black man and a loyalty to Luther that drives him to seek revenge. He can act, he can sing and he can dance—whether it be tap, the Charleston or Broadway. He brings down the house in “I Roll Bones with the Devil,” and he’s tender in a duet with the Dominican waitress Loretta. 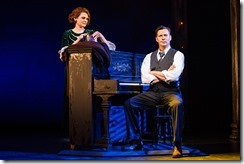 As the two undeveloped love interests, Kate Shindle (the madam Billie; right) and Janet Dacal (Loretta) each sing the lyrics of torch songs filled with emotion and longing, acting the words instead of just warbling them. Shindle is also a fine comedic actress, a skill evident in a scene where the con men hijack a Western Union office and terrorize a humble clerk.

Other standouts in the large cast include Kevyn Morrow as the avuncular Luther; Peter Benson as the twirpy Erie Kid; Richard Kline as the fixer Kid Twist; and Christopher Gurr as J.J. Singleton, the con man with a British accent. Tom Hewitt’s Doyle Lonnegan is a formidable antagonist for Hooker and Gondorff; his tall, thickset body exudes power, reinforcing the notion that he “kills for pride.” His vindictiveness is palpable. 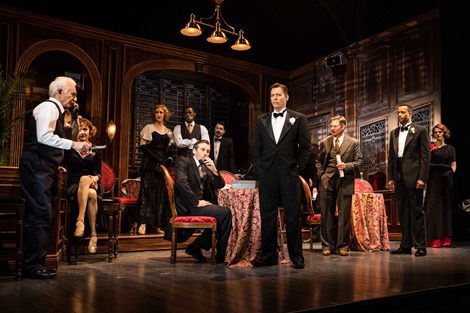 High points of the plot involve a poker game and two scenes with horse races called in a bookie joint (above) set up just to lure Lonnegan in for the con. The card game feels endless; perhaps it wouldn’t have had the action preceding it not poked along with superfluous production numbers. The race-calling scenes are reminiscent of Guys and Dolls and the Ascot Races in My Fair Lady, and equally as entertaining. Gurr is wonderful as the announcer calling the races; talking quickly nonstop, he really ramps up the excitement not only onstage but throughout the entire auditorium.

As usual, Paper Mill Playhouse production values are high. Beowulf Boritt’s sets are magnificent; I especially liked his use of a backdrop that widens and heightens to reveal a small rectangle of action. Paul Tazewell’s lovely costumes transport us to 1936 Chicago; whores or fancy ladies and gents are dressed appropriately and colorfully. Japhy Weideman’s lighting is especially effective in the scenes on the train, drawing our eyes to three different locations as the action shifts. And Randy Hanson’s sound design enhances the sometimes frenetic action onstage.

Kudos to Warren Carlyle for his complex choreography encompassing a variety of styles, which the cast performs with energy. And the orchestra conducted by Fred Lassen provides terrific musical accompaniment without drowning out the actors. 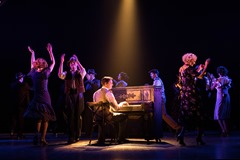 With some judicious editing, The Sting could be Broadway-worthy. Curtail some endless-seeming production numbers, especially those involving dance; eliminate the bits where prostitutes are carried onstage in chairs to music and the brief ballet when Hooker and Loretta exit, ostensibly to her bedroom—we know what’s going to happen next. As for Connick’s star turn that opens Act II, shorten it instead of scrapping it. We all know he’s talented.

As it stands, I’d give the world premiere production of The Sting a B or B-minus. Its good bones, talented performances and fine production values sow the seeds for a successful Broadway production. All it needs is some fine-tuning so that the long con becomes more riveting than boring.

The Sting will be performed at the Paper Mill Playhouse, 22 Brookside Drive, Millburn, through April 29. For information and tickets, call the box office at 973.376.4343 or visit www.papermill.org online.