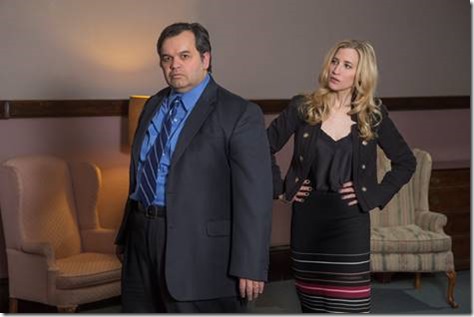 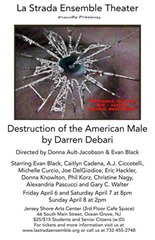 Destruction of the American Male
starring A.J. Ciccotelli and Christine Nagy, co-host of The Bob and Christine Morning Show on 106.7 Lite-FM

"Using the new café space opens up the staging possibilities for our director's Donna Ault-Jacobson and Evan black to explore Jack's world that is crumbling around him," state artistic director and star A.J. Ciccotelli, who plays Jack.  "It's an actor's dream to be so close to an audience and be able to move them, disturb them, draw them near in such a way. This play, this cast, this production shouldn't be missed." (Above: A.J. Ciccotelli as Jack Gallo and Christine Nagy as Marlene. Photo by Darren Debari)

"DESTRUCTION is really three short plays tied together to make a universe," says local Brick playwright Darren Debari. "In this universe we watch a man struggle with relationships, employment and ultimately who he is. This play tackles the issue of the changing world and most especially the role of the male in American Society, head long."