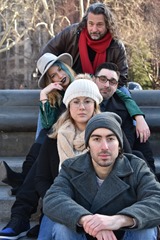 WHEN: Friday, February 16th, and extending for eight shows through Sunday, March 4th. Performances are Friday and Saturdays at 8:00 and Sundays at 2:00pm.
WHERE: Black River Playhouse, on the corner of Grove Street and Maple Avenue, Chester
TICKETS: $20.00 with a discounted price of $18.00 for seniors over 65 and students under 18. Tickets may be purchased online at www.chestertheatregroup.org

Seminar is a provocative comedy from Pulitzer Prize nominee Theresa Rebeck. Four aspiring young novelists sign up for private writing classes with Leonard, an international literary figure. A well-to-do Upper West-Sider with a fancy apartment has arranged the seminar for herself and three friends. Leonard’s unorthodox teaching style soon pits the classmates against each other. Some of them flourish under his version of tough love, while others flounder with self-doubt. Wordplay is not the only thing that turns vicious as innocence collides with experience in this biting Broadway comedy. The production contains mature content and language and may not be suitable for children under 16.

Theresa Rebeck is an American playwright and novelist. Her work has appeared on the Broadway and Off-Broadway stage, in film, and on television. Among her awards are the Mystery Writers of America’s Edgar Award and the Athena Film Festival Award for Excellence as a Playwright and Author of Films, Books, and Television. Seminar premiered on Broadway in 2011 and starred Alan Rickman who originated the role of the lead character, Leonard. The production was nominated for Best Play by the Outer Critics Circle and the Drama League.

The Chester Theatre Group performs in The Black River Playhouse, an intimate, 100-seat theater in the heart of Chester Borough’s historic district. The venue’s in-the-round format ensures that every seat offers an engaging, memorable experience for each audience member.

For more information, visit the CTG website at http://www.chestertheatregroup.org