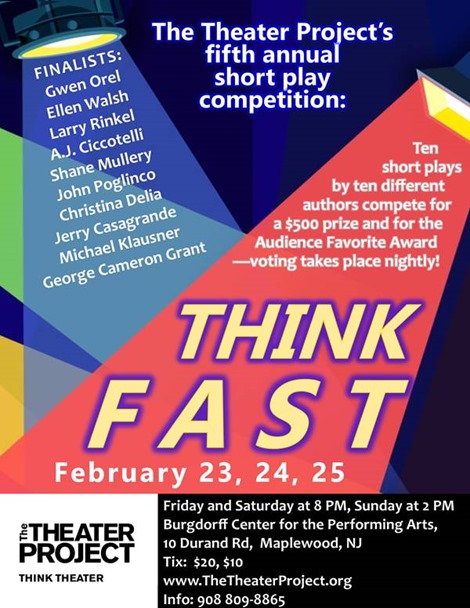 Which play will be voted Audience Favorite – the romance, the thriller, or the comedy?  And which author will take the $500 Judge’s Award?

Join The Theater Project, a professional theater in Maplewood, NJ, when they showcase ten short plays in their fifth annual one-act play competition, THINK FAST at the Burgdorff Center for the Performing Arts. The contest, open to playwrights in the New Jersey-New York area, invites the audience to vote for their favorite short play. Votes are tallied and winners announced at an open reception following the Sunday afternoon performance.

The audience is asked to vote for their favorite plays after each show. A special award for “Audience Favorite” along with the $500 Judges’ Prize will be announced at a reception for all involved after the Sunday, February 25, performance. In addition to Best Play, a panel of judges will also vote on awards for Best Actor, Best Actress and Best Director.