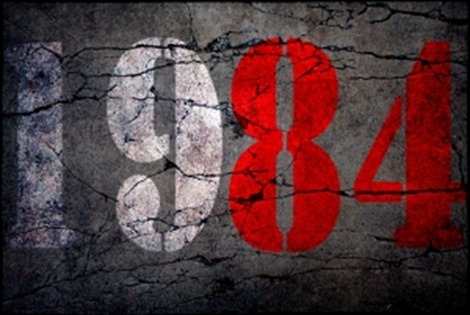 WHEN: February 8 through 12. Thursday, February 8, at 7:30pm; Friday, February 9, at 8pm; Saturday, February 10, at 2pm; Sunday, February 11, at 2pm and Monday, February 12, at 7:30pm
WHERE: Little Theater on the campus of Centenary University, 400 Jefferson Street, Hackettstown
TICKETS: $12.50 for adults and $10.00 for children under 12.
For more information or to purchase tickets visit centenarystageco.org or call the CSC box office at (908) 979 – 0900.  The box office is located in the Lackland Performing Arts Center at 715 Grand Ave. on the campus of Centenary University.  The box office is open Monday through Friday from 1 – 5pm and two hours prior to every performance.  Centenary Stage Company can also be found across social media platforms; Facebook, Instagram and Twitter.  Like and follow to receive up– to–date news on the latest CSC happenings.

Based on the iconic novel by George Orwell, 1984 brings us the story of Winston Smith, a cog in the giant machine state of Oceania. Physically and mentally under the omnipresent eye of Big Brother, Winston has been caught struggling for scraps of love and freedom in a world awash with distrust and violence. A ferocious and provocative adaptation of one of the most prescient works of literature of the last century.

The 2017-2018 season of performing arts events at the Centenary Stage Company is made possible through the generous support of the Geraldine R. Dodge Foundation, the NJ State Council on the Arts, the Shubert Foundation, the Blanche and Irving Laurie Foundation, the Sandra Kupperman Foundation, and CSC corporate sponsors, including Season Sponsor Heath Village Retirement Community, the House of the Good Shepherd, Hackettstown Medical Center, Home Instead Senior Care (Washington), Zonta of Morristown, and Fulton Bank of New Jersey, as well as Centenary Stage Company members and supporters.