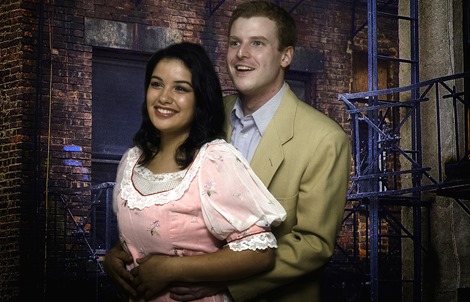 WHEN: Fridays, Jan. 5, 12 and 19 at 8 p.m.; Saturdays, Jan. 6, 13 and 20 at 8 pm.; and Sundays, Jan. 7, 14 and 21 at 2 p.m.  A reception with the cast and crew follows the opening night performance on Jan. 5.
WHERE: Kelsey Theatre is located on the college’s West Windsor Campus, 1200 Old Trenton Road.
TICKETS: $20 for all and may be purchased by calling the Kelsey Box Office at 609-570-3333 or online at www.kelseytheatre.net.
Kelsey Theatre is wheelchair accessible, with free parking next to the theater. For a complete listing of adult and children's events, visit the Kelsey website or call the box office for a brochure.

The Sharks and the Jets are preparing to do battle over their small piece of New York’s Upper West Side, while star-crossed lovers Tony and Maria are on a collision course towards tragedy… (Above: Tara Keelen of Bloomfield is Maria  and Mason Kugelman of Rumson is Tony. Photo by Bob Terrano) 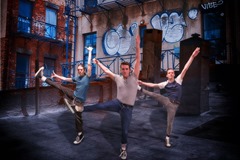 With its dark themes, stunning musical score, complex dance numbers, and a focus on social issues, West Side Story broke new ground when it premiered on Broadway in 1957. The famed Leonard Bernstein score, with lyrics by a young Stephen Sondheim, includes such unforgettable numbers as “Something's Coming,” “Maria,” “America,” “Somewhere,” “Tonight,” “I Feel Pretty,” “One Hand, One Heart,” “Officer Krupke,” and “Cool.” The production was nominated for six Tony Awards including Best Musical. A film version followed in 1961 and was nominated for eleven Academy Awards and won ten, including Best Picture. 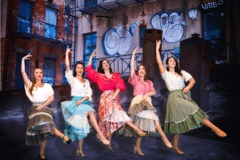 The PinnWorth cast includes Mason Kugelman of Rumson as Tony; Tara Keelen of Bloomfield as Maria; Lorraine C. Perri of Florence as Anita; Evan Krug of Edison as Riff; Kevin Albanese of Woodbridge as Bernardo; Erica Boyea of South Plainfield as Anybodys; Peter Sauer of Yardley, Pa., as Doc; Joseph A. Zedeny of East Windsor as Lt. Schrank; David Walter of Lawrenceville as Krupke; and Diana Puertas of Somerville as Gladhand.

Featured as the Jets Girls are Cait Crowley of Bloomfield as Velma; Emily O'Sullivan of Hamilton as Graziella; Deanna Flanagan of Rahway as Minnie; Madison Kotnarowski of Mercerville; Lauren Suchenski of Yardley, Pa., Rachel Tovar of West Orange; Nicole Farina-Machin of Columbus; and Kelly Vallery of Hamilton. The Sharks Girls include Jenna Zielinski of Scotch Plains as Rosalia; Haley Schmalbach of Palmyra as Consuela; Kate Bilenko of Philadelphia, Pa., as Francisca; Lindsey Jordon of Edison; Reva Sangal of West Windsor; and Zoey Aliah Woody of New Brunswick.