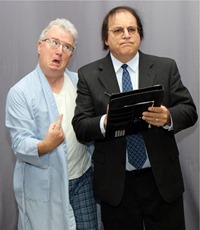 WHEN: two performances only, at 2 pm on Saturday, January 27th, and 7 pm on Sunday January 28th.
WHERE: The Little Firehouse Theatre, 298 Kinderkamanck Road in Oradell
TICKETS: $11 for all performances. Student (25 and younger) rush seats can be purchased for $5 (cash only) starting 30 minutes before curtain at every performance, pending seat availability. There is a limit of one rush ticket per student.
Those interested in Group Sales of 20 or more tickets can email groups@bcplayers.org or call the main number and press #6.
Tickets may be purchased online at www.bcplayers.org, by calling the box office at 201-261-4200 or by visiting the box office during regular box office hours. Parking is free at the Park Avenue municipal lot, across the street, one-half block north of the theatre

Something very funny is going on in Oradell. “Relatively Speaking.”

The plays were written by two playwrights with unique comic voices – the screenwriter/director Ethan Coen of the Coen brothers and Elaine May, originally of the famed comedy team Nichols & May. In the words of the New York Times, the show is “packed with nifty zingers!”

Chosen for the stage by director Paul Reitnauer III because they’re so funny and relatable, Paul says, “Anybody watching these two plays will either identify with the characters or recognize people they’ve met.”

In Elaine May’s George Is Dead, his new widow Doreen (Pauline Quinones of Elmsford, NY) is too hilariously spoiled and superficial to grieve.

Instead, she takes self-absorbed to a whole new level. Rounding out the cast of George is Dead are Melissa Miller of Bergenfield as Carla, Chris Caira of Closter as Michael, Michele Roth of New Milford as Nanny and Anthony Bailey of Ramsey as the Funeral Director.

In Talking Cure, Ethan Coen adapts his trademark dark-comedy, honed in such brilliant films as “Fargo” and “The Big Lebowski”, to create a bitingly funny tug-of-war between a mental patient (John Kiely of Allendale), and the therapist struggling to treat him (Ron Siclari of Oradell). (IMAGE: John Kiely and Ron Siclari. Photo by Barbara Mintz)

The Bergen County Players has grown tremendously from its roots as a small community theatre when it was founded in 1932; today, nearly 300 volunteer members, working on and off stage, make possible the nine productions presented each season.