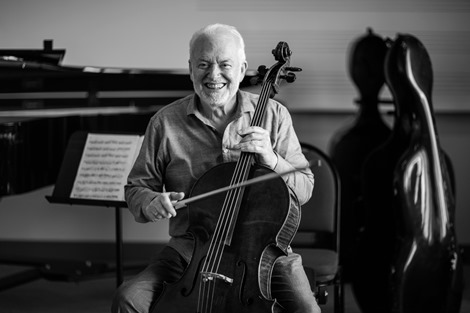 Three-Day Residency: The Art of Teaching and Performing

WHEN: December 10-12
WHERE: Thurnauer School of Music, Kaplen JCC on the Palisades, 411 E. Clinton Ave., Tenafly

The JCC Thurnauer School of Music will host world-renowned cellist, Paul Katz, professor of cello at the New England Conservatory and founding member of the Cleveland Quartet, in a 3-day residency on The Art of Teaching and Performing that will include a film screening, a master class, and a round-table discussion.

Sunday, December 10 at 7:00pm: Screening of the film, “Talent Has Hunger,” an inspiring documentary featuring Mr. Katz and several of his students at the New England Conservatory of Music. Filmed over 7 years, the film is a window into the mysterious world of the artist, the passion that can grip and sustain a young player from childhood through the last days of life and the years of sacrifice and dedication a budding artist needs to fulfill one’s talent. Questions and Answers with Mr. Katz following the screening. TICKETS: $10 public and $8 JCC members.

Tuesday, December 12, 10:00am-12:00pm: Round-Table Discussion on the Art of Teaching, with Paul Katz and members of the Thurnauer Cello Faculty. Attendance is open to the public with FREE admission.

As cellist for the legendary Cleveland Quartet for 26 years, Paul Katz made more than 70 recordings, receiving many distinctions including Best of the Year Awards from Time Magazine and Stereo Review, 11 Grammy nominations, and 2 Grammy Awards. Talent Has Hunger, a film about Katz and his students, was release in 2016, directed by Academy Award nominated Josh Aronson. Since 2001 Mr. Katz has taught cello at the New England Conservatory and directs NEC’s Professional String Quartet Training Program.  His students have achieved international careers, performing with of some of the most illustrious string quartets and serve as principal chairs in major symphony orchestras around the country. In conjunction with WGBH in Boston and NEC, Katz created cellobello.com, an international cello website that featuring video lessons and resources for students and teachers.

The JCC Thurnauer School of Music is a vibrant music community offering private music lessons, group classes and ensembles including chorus, orchestra and jazz. All classes are taught by nurturing and distinguished faculty and children enjoy frequent performance opportunities throughout the year. Enrollment is open and JCC membership is not required. To learn more or to schedule a tour, call 201-408-1465.