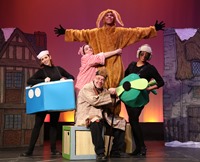 WHEN: Saturday, December 2, at 11:00 AM
WHERE: United Way Theatre, located at 60 South Fullerton Ave, Montclair NJ
TICKETS: The Montclair Arts Festival runs from Wednesday, November 29, through Saturday, December 2. Tickets are available for full days of programming during the Festival. Admission prices begin at $20 for one day, with discounts for multiple day participation. To purchase tickets, visit: montclairartsfestival.brownpapertickets.com.

The performance is hosted by the Montclair Arts Alliance as part of the inaugural Montclair Arts Festival featuring theater, dance, visual arts, music, and opera.

Velveteen Rabbit is based on the beloved children’s book by Margery Williams, adapted for the stage by Pushcart Players’ artistic director, Paul Whelihan. Music and lyrics are by NJ composer, Paul Farinella, and orchestrations are by Tony©, Grammy, and Drama Desk award-winner, Larry Hochman.

Velveteen Rabbit explores the adventure of growing up, the necessity of building relationships, and the importance of using one’s imagination. A child’s love and a little nursery magic transform a favorite toy into a real rabbit. Breath-taking adventures—from deep, dark caves to the wide open sea, to winter wonderlands—show the meaning of true friendship.

Oise Ohiwerei was recently seen as a videographer at the New York Fringe Festival, and as an actor in the short film “Solutions,” screened at the Chain NYC Film Festival. While performing with Pushcart, he is a full time student at Rutgers University. Corey Whelihan (Montclair) is an alum of Ithaca College’s BFA Acting program. He appeared off Broadway in the Pearl Theatre’s production of “The Winter’s Tale” and is a regular in the classical productions of Smith Street Stage in Brooklyn. He performed nationally in Chamber Theater’s touring production of “Eureka!” and with The Pennsylvania Renaissance Faire in Manheim, PA.

Carey Gsell is an actor and designer, recently graduated from Montclair State University. A performer since he was nine years old with Yates Family Musical Theatre, Gsell was recently seen as Tobias in “Sweeney Todd” at Light Opera of NJ. Aliza Sotsky performed at Dimo Kim Musical Theatre Factory, The Hearth Theater Company, The Peccadillo Theater Company, S.T.A.R. at the Directors Company and BMI. She performed off Broadway at Theater at St. Clements in “Green Card: A New Musical!”

Larry Hochman is the Tony and Drama Desk award-winner for best orchestrations for “The Book of Mormon.” He received Tony nominations for last season’s “Hello Dolly” with Bette Midler, “She Loves Me” (2016 revival, for which he won the Drama Desk Award), “The Scottsboro Boys,” ”Monty Python's Spamalot,” (Hochman also received Drama Desk nominations for both), “Fiddler on the Roof” (2004 revival), “A Class Act” and a Tony nomination the Drama Desk Award for 2016’s “She Loves Me.”  Larry composed additional music for Disney’s “Little Mermaid,” for Stephen Spielberg’s “Amazing Stories” and for numerous celebrity concerts.  Other awards include the ASCAP Award for Musical Theater (“One Man Band”), 4 Emmy Awards for “The Wonder Pets” television series, and a Bistro Award for composing “One Man Band.”  He has orchestrated and/or written the scores for the majority of Pushcart’s productions.

Pushcart’s performance is made possible in part by the Montclair Foundation, which supports not-for-profit organizations that meet cultural, educational, social service, health, and quality of life needs in the greater Montclair community. Montclair Foundation serves as a permanent conduit for charitable giving.

Pushcart Players is the award-winning professional touring theater company specializing in arts education for children. Twice nominated for an Emmy©, Pushcart is the recipient of numerous state and private awards for excellence and innovation. A social-profit organization founded in 1974, Pushcart brings substantive musical theater, workshops, and residencies to young people and their families in schools and theaters nationwide. The company has traveled more than 2 million miles nationally and abroad, from the rural red schoolhouse to the nation’s White House.  All performances are accompanied by innovative scenery, complete lighting, and state of the art sound systems, making them adaptable to any location.

Montclair Arts Alliance (MAA) is a service organization for Montclair area Arts Organizations and artists. MAA is a membership driven organization that offers a township-wide Arts Festival, an arts center with diverse programming, networking opportunities, roundtables,  joint marketing, and advocacy for the importance of arts to everyone’s lives.