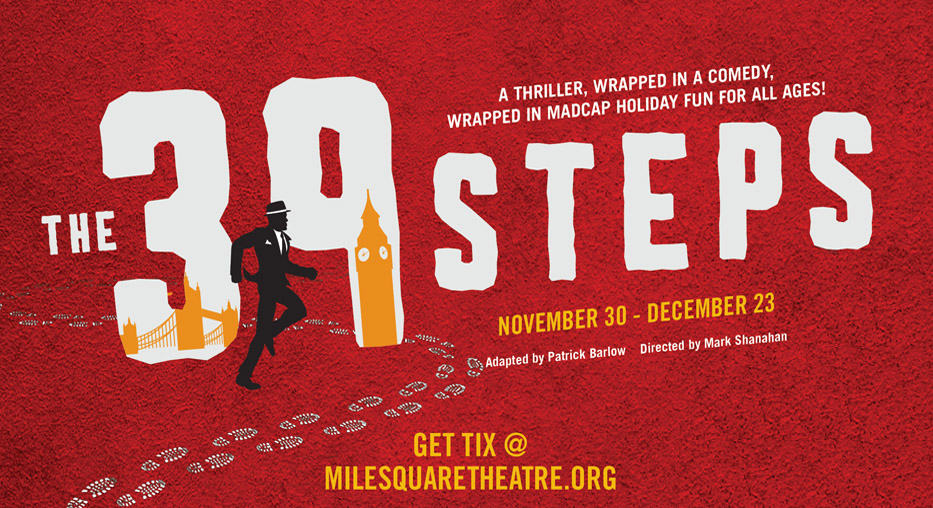 Mile Square Theatre, Hudson County’s leading professional theatre, closes its 2017 season with a rollicking send up of Alfred Hitchcock’s classic thriller, The 39 Steps. Just in time for the holidays, Patrick Barlow’s adaptation is a fast-paced comic romp that turns the classic Hitchcock’s masterpiece into an evening of pure comic joy that will be a welcome treat for audiences of all ages.

“We are so excited to produce The 39 Steps this holiday season,” says MST Artistic Director Chris O’Connor. “We wanted to present a show that would delight everybody, and this show fits the bill. It’s no exaggeration that our director, Mark Shanahan, is probably the best person in America to direct it, too. He was in it on Broadway, and has directed many regional theatre productions, including Houston’s Alley Theatre’s recent hit, which broke all box office records for them. Mark has an amazing knack for this type of comedy, and we’ve assembled a stellar cast.”

MARK SHANAHAN Mark’s directorial work has been seen on numerous stages across the country, including  The Alley Theatre, The George Street Playhouse, The Fulton Opera House, Arkansas Rep, Merrimack Rep, Penguin Rep, Florida Studio Theatre, Cape Playhouse, Weston Playhouse, Hangar Theatre, Theatre Squared, Westport Country Playhouse and others. New York acting credits include the  Broadway hit The 39 Steps (American Airlines, Cort Theatre); Small World (59E59); The Shaughraun and Tryst (Irish Rep); Checkers (The Vineyard Theatre) As Bees In Honey Drown (Lucille Lortel Theatre); Philadelphia, Here I Come! (Roundabout); and many more. Regionally, he has appeared extensively at The Alley Theatre and The Westport Country Playhouse, as well as Hartford Theatreworks, The Bay Street Theatre, Pioneer Theatre,  Merrimack Rep, The Denver Center, The Kennedy Center and others. Mark has been seen on television on David Letterman and All My Children, and in the films Kill Me, Safe Men, Bug, Endsville, Yellow and Mad About Harry and more. Mark is the author of the Off Broadway and regional hit comedy, The Dingdong, based on Feydeau’s Le Dindon. Mark is a graduate of Brown University and holds an MA from Fordham University, where he teaches. He is an award winning voice over artist and Edgar Award nominated playwright. For more, please visit www.mark-shanahan.net.

JOE DELAFIELD has performed on Broadway as Damis in Tartuffe (Roundabout) and off-Broadway in Fashions for Men (Mint), Outward Bound, Theophilus North, and The Breadwinner (Keen Company).  Regional: Ah, Wilderness!, Da (both at the Guthrie), Journey’s End (Alley Theatre), School for Husbands (Westport Playhouse), The Subject Was Roses (Pittsburgh Public), Romeo and Juliet (Virginia Stage Company), The Glass Menagerie (Ensemble Theatre Co.), Noises Off (La Mirada), Juno and the Paycock (Odyssey Theater), Photograph 51 (Fountain Theater), The Dingdong (Florida Rep), and The Hound of the Baskervilles (Hudson Stage).  Joe is a member of LA’s Antaeus Company, where he was seen in The Autumn Garden, The Seagull, Macbeth, The Crucible, and The Liar, for which he was nominated for LA’s Best Supporting Actor Ovation Award.  TV/Film credits include The Sopranos, All My Children, Filmic Achievement, and Company K.  Joe holds a BA from Columbia University and an MFA from NYU’s Graduate Acting Program.

ZACHARY FINE is an actor, writer, director and teacher. He has taught Clown, Games and Shakespeare in actor training programs throughout the country and is currently on faculty at NYU Tisch School of the Arts. His original comedy shows Walled In and Manifest Destiny both premiered at the IRT Theater in New York City. All of Zack’s original work has been produced by Frances Black Projects. Zachary is the recipient of the 2015 Helen Hayes Award for his work in Fiasco Theater Company’s Two Gentlemen of Verona. Broadway credits include China Doll with Al Pacino. Off-Broadway credits include The Acting Company, The Mint Theater, Theater For A New Audience, New York Classical Theater. Regionally, his credits include work at the Guthrie, Folger, Playmakers Rep, Asolo Rep, Fulton Theater, Colorado Shakespeare Festival and two seasons at the Great River Shakespeare Festival. As a Director; Hudson Valley Shakespeare Festival; Key West Theater; Thin Air Shakespeare Festival, The Performing Arts Project; Tony nominee Bryce Pinkham’s solo show Between The Moonand Me, NYU. TV, Film, Commercial, Voice-Over credits include: Person of Interest, BlackBox, One Life to Live, Z-Rock, Grand Theft Auto 5 and A Midsummer Night’s Dream (New Book Press). His writing has been supported by the Lark, EAT Festival’s One Man Talking, Space on Ryder Farm, IRT Theater, Off-Square Theater and The Acting Company’s Write-On! New Play Series. Zachary apprenticed with Christopher Bayes and trained at Ecole du Phillipe Gaulier, MFA from the University of Tennessee and B.A. (Summa Cum Laude) Oberlin College.

ALYCIA KUNKLE is delighted to be making her MST debut! She was recently seen at The Actors Co. Theatre in The Prime of Miss Jean Brodie and at Mountain Playhouse in Caught in the Net. Other favorite credits include Charley’s Aunt CHARLEY’S AUNT and Steel Magnolias at The Peterborough Players, A Child’s Christmas in Wales at Shakespeare Theatre of NJ, Becky Shaw and The Ladies Man at Centenary Stage Co., and a reading of Kenneth Jones’ Hollywood, Nebraska at The Actors Co. Theatre. Ms. Kunkle spent two seasons at the Monomoy Theatre on Cape Cod performing in classics like South Pacific, She Loves Me, Brighton Beach Memoirs, And Then There Were None, The Man Who Came to Dinner, Twelfth Night, Kiss Me Kate, The Odd Couple, and others. MFA Acting, Ohio University.

EVAN ZES’s New York credits include Incident at Vichy at The Signature Theatre; Rent Control (writer and performer) at Soho Playhouse,Freedom of the City, Man and Superman, White Woman Street, Around the World in 80 Days at Irish Repertory Theatre and American Dreams with The Acting Company. His international credits include Julie Taymor’s The King Stagg at the Barbican, London and Dream Play at the Moscow Art Theatre. Select regional credits include The McCarter, The Alley, The Goodman, The Old Globe, NY Stage and Film, Cleveland Playhouse, Westport Country Playhouse, La Jolla Playhouse, Arena Stage, Cincinnati Playhouse in the Park, The Shakespeare Theatre DC, Pittsburgh Public Theater, St. Louis Repertory Theater, Baltimore Centerstage, and Berkeley Rep. Evan's film and TV credits include The Path, The Street and Last Night at Angelo’s and All My Children. He has an MFA from A.R.T/ Moscow Art Theatre at Harvard University. Upcoming: Murder on the Orient Express at Hartford Stage. Follow Evan’s award winning one-man show at evanzesrentcontrol.com

CHRIS O’CONNOR (MST Artistic Director/Producer) Chris is Founding Artistic Director of Mile Square Theatre. He conceived and produces the annual 10-minute play festival 7th Inning Stretch. He has directed over 20 productions at MST and has directed at theatres and universities all over America, most recently at Lyric Repertory in Logan, Utah, where he directed The Complete Works of William Shakespeare Abridged. His recent work at Mile Square Theatre includes Betrayal, Circle Mirror Transformation and the world premiere of Long Gone Daddy by Joseph Gallo. As an actor, Chris has performed in such theatres as Franklin Stage Company, Seattle’s A Contemporary Theatre, The Culture Project, Soho Rep, The Ahmanson, Gloucester Stage, Provisional Theatre of Los Angeles, The Bathhouse Theatre, Seattle Children's Theatre, City Theatre in Pittsburgh, where he originated the role of Peter in Craig Wright’s The Pavilion, and recently at Maltz Jupiter Theatre in Billy Elliot. Recent TV credits include Magic City and Burn Notice. His plays for young people have been produced at Seattle Children's Theatre, his short baseball play The Mascots is published in Smith & Kraus’s 2011 Best 10-Minute Plays and his play Miss Ring Has Lost Her Phone was a finalist in the 2016 City Theatre National Short Play Competition. He is an Assistant Professor on the Theatre Arts faculty at Molloy College. Chris holds a BFA from Carnegie-Mellon University and and MFA from Rutgers University.